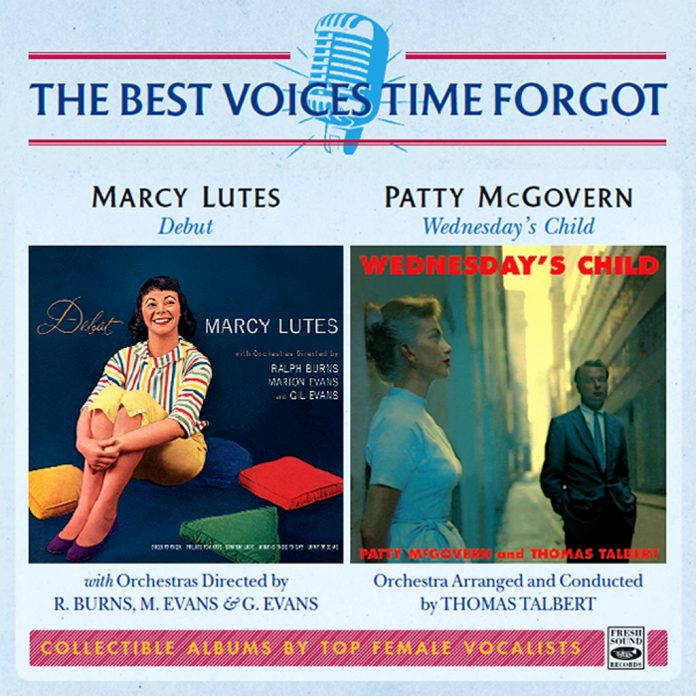 This is one of the first pairings in what looks like Fresh Sound’s series of The Best Voices That Time Forgot and amongst many other things it’s a pairing for which (for once) there’s no hype behind the title.

Lutes was making such an impression back in 1957 that she has orchestras directed by Gil Evans, Ralph Burns and Marion Evans backing her. Cheek To Cheek, taken at a tempo Fred and Ginger would have been happy at, is blessed with the former Evans’ tonal colouring and Lutes basks within those colours like a singer who not only knows how to go about her business but also how to make her case.

Her pitch perfect (in the sense of being slightly plaintive) reading of the lyric to I Didn’t Know About You highlights also her sparing use of vibrato, a point which underscores her jazz sensibility and thus yet again raises the issue of the distinction between jazz and superior pop for those who fret over such things.

McGovern’s voice is of a darker hue, which enables her to extract unusual poignancy from You Don’t Know What Love Is. Indeed her feel is such, enhanced by the kind of distinctive Tom Talbert arrangement that serves her throughout the set, that she bridges the divide between singer and listener with notable aplomb.

Reiterating the pitch perfect point made above, All In Fun has McGovern effortlessly getting beneath the lyrical surface and a solo from Joe Wilder that empathetically complements her direct, unembellished approach beautifully.

Barry Witherden - 18 September 2021
Those of us of a certain vintage may remember the stir caused by Ganelin’s trio in the early 80s. In the West we had become familiar with some contemporary jazz...