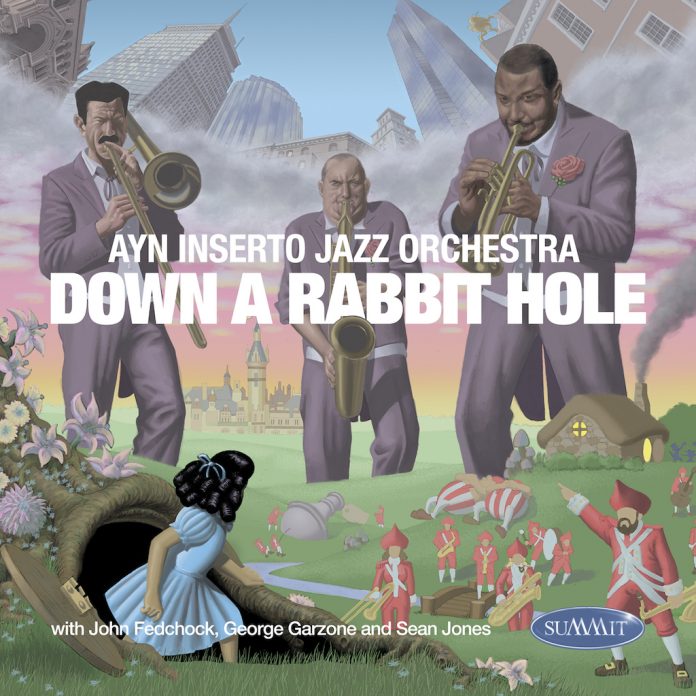 Boston-based arranger, conductor and composer Ayn Inserto established her Jazz Orchestra in 2001. The group released its first album in 2006 (Clairvoyance) and its second, Muse, in 2009. Down a Rabbit Hole is the orchestra’s third release and features five Inserto compositions plus “BJ’s Tune” by Sean Jones and “I’ll Be There”, written by Berry Gordy and others and a number one hit for the Jackson 5. It also features three guest musicians – trombonist John Fedchock, tenor saxophonist George Garzone and trumpeter Jones – alongside the orchestra’s members.

The orchestra plays beautifully throughout Down a Rabbit Hole. The three guest musicians get more than their fair share of solos (six, from a total of 12), with Fedchock’s solo on “Mister” and “Dudley” being especially effective, but it’s a shame that more of the orchestra’s members weren’t given their chance in the spotlight (especially the rhythm section players).

In the hands of the Jackson 5, “I’ll Be There” is a gorgeous four minutes of Motown magic – Inserto’s version gives the melody to Jeff Clausen’s flugelhorn but after just a few bars (no further than the first time Michael Jackson sings “I’ll be there”) the arrangement leaves that melody behind and with it any semblance of the romantic tune that brought so many youth-club discos to an end in the 70s.

Despite the allusions to Alice’s adventures in wonderland (the cover art features Alice emerging from the rabbit hole), there’s none of Lewis Carroll’s eccentricity or strangeness to be found here. Even at their most energetic and powerful (the closing section of “Three and Me” for example) the performances – and Inserto’s arrangements – stay close to the big band mainstream. For many big band fans that’s exactly what’s wanted. For those who prefer things to get a little wilder and less predictable, other jazz orchestras are available.

Michael Tucker - 10 January 2022
I requested this release for review “blind” as I enjoy the Brazilian Eliane Elias's music so much. Many a year after I had enjoyed her fine work in Steps...