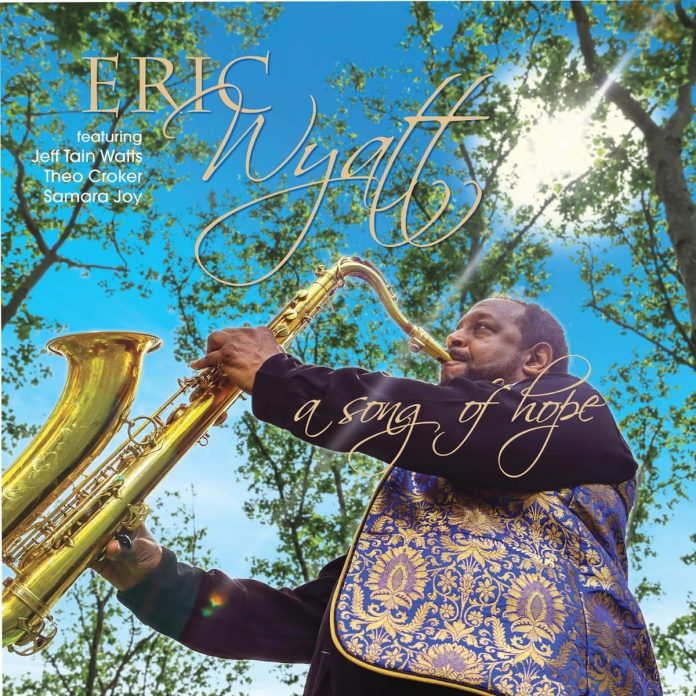 Led by saxophonist Eric Wyatt, the session uses material inspired John Coltrane – not simply copying but a thoughtful interpretation of that style. Wyatt’s playing is clearly influenced by Coltrane, but also by Sonny Rollins – strong, direct and melodic, coming in sharply on solos – snap, right on the button. His fellow musicians include the splendidly clear-toned trumpeter Theo Croker (incidentally, Doc Cheatham’s grandson) and the experienced drummer Jeff Watts.

A quartet creates the template with title track A Song Of Hope, Wyatt quoting from Trane’s Inch Worm. The five-piece sees Eric Wheeler’s bass and Watts’ drums propelling the hard-driving Blues For RH (Roy Hargrove), the solos of Croker, pianist Donald Vega and Wyatt straight out of the top drawer. One 4 Hakim, on which Wyatt references My Favourite Things, and McCoy Tyner’s Contemplation, with its harmonious horns, are similarly impressive; for good measure, Wyatt tips his hat to Rollins’ Theme From Alfie on the latter. Chance and Coltrane’s Central Park West are slower, Wyatt’s smooth, warm tone emerging.

Trumpeter Chris Lowery’s composition, Fur Live, has the larger aggregation, giving a full sound. It’s a great arrangement with a barnstorming front line of four horns and the composer’s high-note solo is a good contrast with the lower register of Croker’s flugelhorn. Wyatt again references Alfie, perhaps recalling the interaction of Rollins with Oliver Nelson’s band.

Vocalist Samara Joy joins for Sting’s Fragile, Wyatt on soprano, and for a moving rendition of Say Her Name, Wyatt’s requiem for the late Breonna Taylor, a victim of US police brutality. The short duets include the final piece, Of Things To Come, Watts’ mini tour de force, assisted by Wyatt.

Mention must be made of pianist Vega’s contributions, whether slow and considered (Fragile), soulful (Fur Live), Tyner-influenced (One 4 Hakim and Contemplation) or percussively Latin (Sunset Park Bonita). His support work is pressing and his solos inventive and relevant to the context.

This is a well-balanced, enjoyable choice of material. Recommended.

John Adcock - 14 April 2020
Australian composer and bandleader Perica explores all the different textures available in an orchestral setting on this album. It’s a surprising mix of frenetic, interwoven, pulsing themes and quieter...