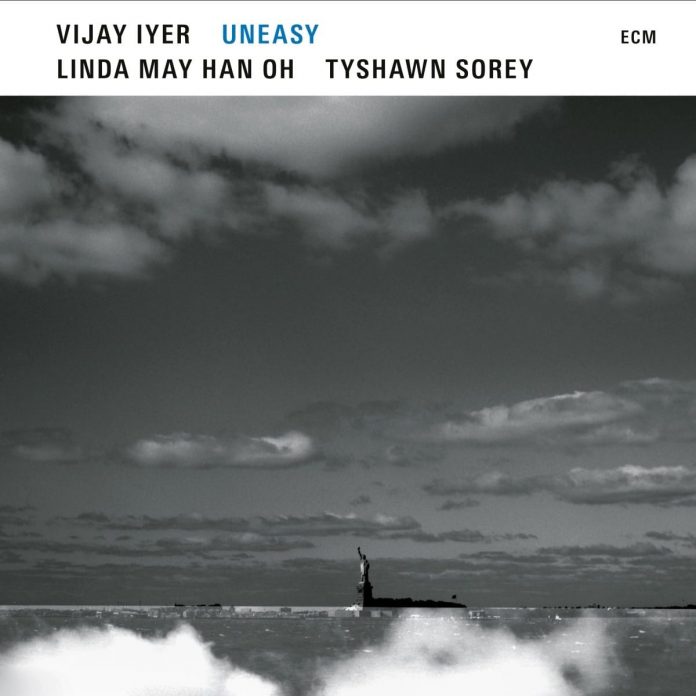 The origins of Uneasy can be traced back to 2011, in a collaborative project of the same name (styled ‘UnEasy’), between Indian American pianist Vijay Iyer and Karole Armitage’s dance company: Armitage Gone! The title of piece, says Iyer, referred to “instabilities that we then sensed beneath the surface of things . . . an emerging anxiety within American life”. Twenty years on, this feeling has not been lost: that very same instability, anxiety and unease has only blossomed in both scale and severity.

This record is perhaps a timely release. Iyer is joined by double bassist Linda May Han Oh and drummer Tyshawn Sorey; it’s the recording debut of this particular trio, although the three are certainly no strangers, having first formed at the Banff International Workshop in Jazz and Creative Music back in 2014. As such, the chemistry and dynamic here is refined. Iyer’s own playing is effectively flawless, from restrained melodies and deft, cascading improvisations to dramatic hammered chords.

The compositions themselves are Iyer originals, spanning 20 years of the aforementioned growing unease and instability, save for two covers – Drummer’s Song by Geri Allen and Cole Porter’s Night And Day, the latter almost unrecognisable.

Quoting again Iyer’s own words about the album, Uneasy pays “tribute to both the loud and the quiet, the quick flurry and the slow rise, the hurricane and its eye, the uprising and its steady dream of abolition”. There is instability and anxiety in these pieces, but there is also hope.

Derek Ansell - 13 February 2020
The cello played little part in jazz as a solo instrument until 1949 when the master bassist Oscar Pettiford broke his arm and while recovering couldn’t get comfortably around...