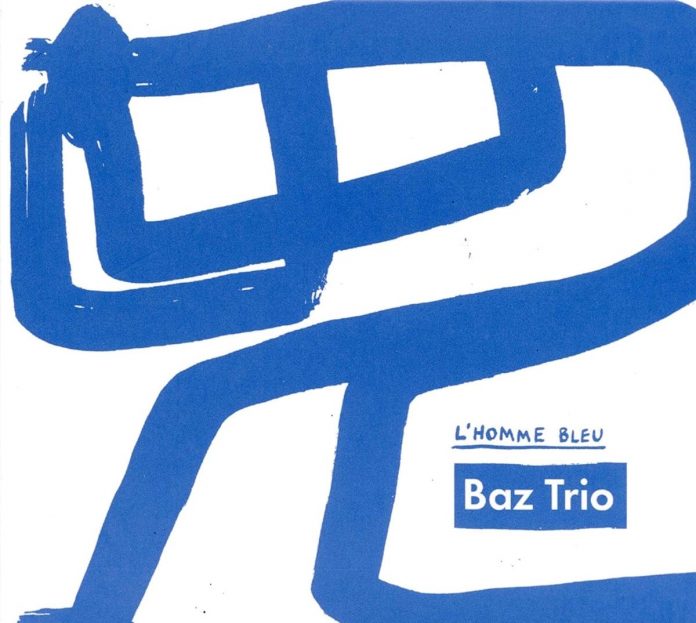 All three musicians have great touch and taste. Packaged in a sturdy triple fold-out format with excellent art and design work by Marie Lavis (pitched somewhere between Matisse and African rock paintings) the beautifully recorded L’Homme Bleu should strike many a chord with anyone who has enjoyed the sort of post-Bill Evans piano trio jazz signalled by such names as Keith Jarrett and Bobo Stenson, Enrico Pieranunzi and John Taylor.

There is much tender albeit sinewy lyricism to savour, exemplified by the reflective One For Flint, with its resonant pizzicato from Rahola, and the spaciously stepped, organically building title track – inspired by the Berber Tuareg nomads or “blue people” of the Sahara and featuring further fine pizzicato from Rahola.

In contrast, Tawa, Lamma Bada Yatathana, Claudio and Underwater all showcase the sometimes ostinato-sprung rhythmic energy which can fire up the three-in-one interaction of a trio alert always to the poetic potentiality of fluid shifts in the dynamics of melodic phrase, spaced bass figure and rhythmic accent.

A thoroughly realised and consistently enjoyable debut: enjoy, especially, the gentle impressionist overtones of the meditative Tree Folks, the variegated emotional projection in the at times achingly lovely Rosa, and the laid-back, rolling and building affirmation of the concluding, Jarrett-touched Rehearsal Song. On this showing, the excellent Bazz Trio could – and should – go far.

Bruce Lindsay - 09 August 2019
Mary Stallings celebrates her 80th birthday in 2019. It’s worth pointing this out (the liner notes do so, twice), because you’d never know it by listening to this album....