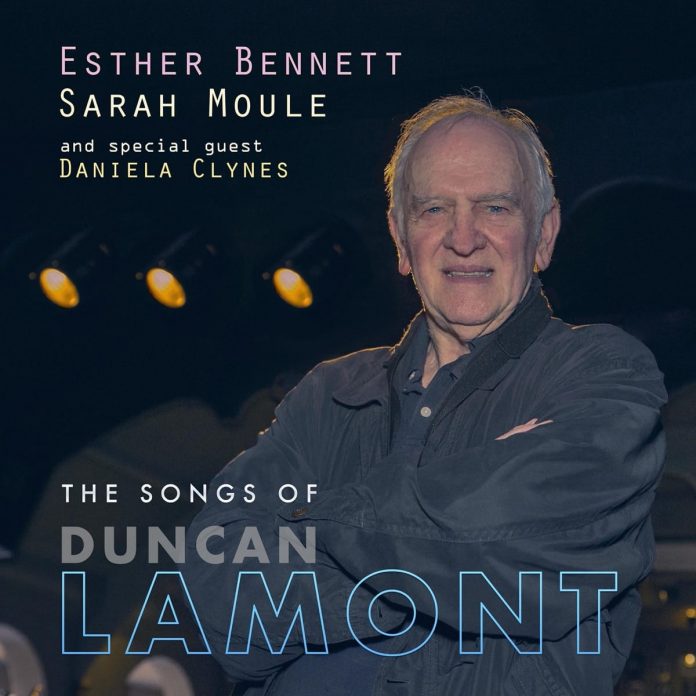 Duncan Lamont was an underrated but well respected figure on the British jazz scene. I recall first seeing him play around 1972 at a small pub in South London, The Lambeth Walk, with Phil Seamen, who lived just round the corner from it, not long before the drummer’s death. An eventful evening, both for the music and for the look on the saxophonist’s face as he covered his eyes from the sight of an “over-refreshed” Seamen balancing precariously on his drum stool to remove an offendingly bright light bulb hanging above his kit, miraculously achieving his mission. But to the matter in hand…

Lamont’s compositions have caught the attention and received plaudits from figures such as Gil Evans, Blossom Dearie, Sammy Cahn and even Fred Astaire and this EP shows exactly why. The vocals are shared by two of the foremost singers on the circuit. Two numbers are by Sarah Moule, with Lamont and pianist Simon Wallace: I Told You So, a description of a common situation – a wounded soul, not wanting to say those words but feeling vindicated, with a certain satisfaction; and Stark Reality, about splitting up, regrets and resignation. There is a sense of Getz in Lamont’s playing with his warm, lyrical tone and laid back support of the vocalist. On Stark Reality we are treated to a more extended solo.

Esther Bennett’s session at the 606 Club has a quartet and resulted in Pretty People, a look at alienation in relationships and society in general, and There Ain’t Nothing Like The Blues, with its underlying darkness. The final track, A Great Day In Harlem, adds Daniela Clynes to form a vocal trio with Moule and Bennett, Duncan Lamont Jnr taking the sax duties, his harder edge a contrast to his father’s playing. A celebration of Art Kane’s assemblage of musicians on East 126th Street in 1958, the lyrics namecheck a number of those who were present.

All the words are clear and discernible, thanks to the enunciation and diction of the vocalists and their interpretation of the lyrics, and it is clearly a labour of love, a well-deserved tribute to a much loved musician. These numbers merit an inclusion in any singer’s repertoire and I felt I’d like to hear more, as it’s hardly been off the player since getting it. Enjoyable, perceptive and at times alarmingly close to the bone. Recommended. It’s a download only at the moment, with vinyl projected for this year some time.