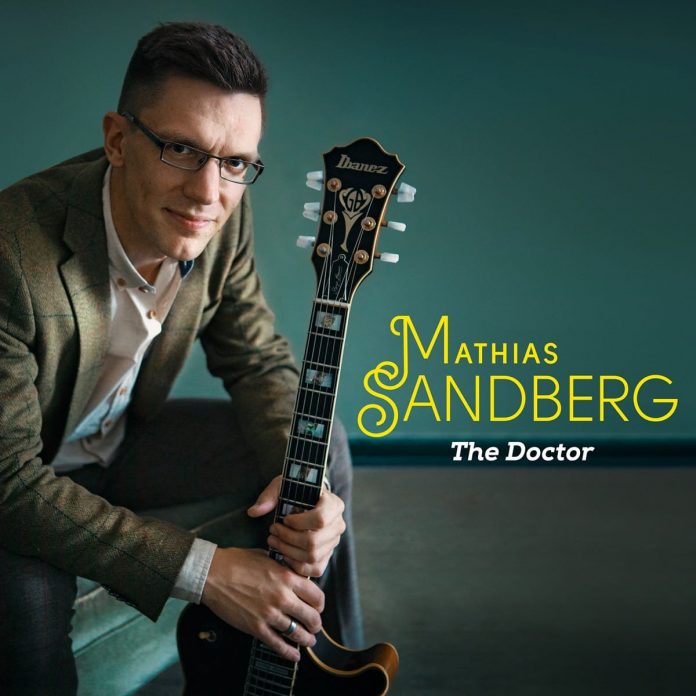 A new Finnish guitar man in town. Mathias Sandberg (aka “the Doctor”) currently enjoys enormous popularity in his home country, partly a consequence of a packed and well-attended touring schedule. Yet he has also been called “one of Finland’s best kept secrets”.

Certainly details of Sandberg’s early life (including his age) are scarce, but include the intelligence that he started playing guitar at the age of 11 in his home town of Jakobstad, and five years later secured a teaching position at the local music school. After graduating from the region’s conservatory, he studied briefly at the Berklee College of Music in Boston, and then at the Manhattan School of Music in New York City. Returning to Finland, he established a new base in the town of Vaasa, and formed a short-lived quartet – Dr. Sandberg’s Soul Clinic.

He is accompanied by bassist Zacharias Holmkvist and drummer Stefan Brokvist – both outstanding musicians – and this is his debut album. There is much to admire and recommend. All the compositions bar one – Twinkle Twinkle Little Star – are by Sandberg and have the stamp of originality and wit. The opener, a fast-tempo Too Bad, has the tightly meshed trio on fast forward. Brokvist contributes a dancing and hypnotic solo, while Sandberg evokes shades of Wes Montgomery.

Sunday Nap is more relaxed and he relates that it was written on a sunny Sunday in 2013 “in that state of mind of my living room couch”. Holmkvist contributes delicately to the laid-back atmosphere. Things again pick up speed with the funky Brewin’ – a reference to one of Sandberg’s favourite activities before the imposition of stricter alcohol laws in Finland. His extended and fleet-fingered solo is one of the session’s many highlights. The longest track, Not Yet, features a plangent Holmkvist solo, while Sandberg comments enigmatically that the title “refers to something someone I once dated, may or may not have said”.

Of the remaining Sandberg compositions, Good Enough (Ain’t Good Enough) swings from start to finish, and might, he reflects, have been influenced by McCoy Tyner. In a similar vein, the tender and delicate The Wait Out was written while Sandberg was awaiting the birth of a son, and “was inspired by some of the chord voicing Chick Corea used during the time he played the Rhodes piano exclusively”. The rocking Breakfast Blues – inspired by Count Basie, Joe Williams and Jimmy McGriff – has Sandberg as primus inter pares in supportive company. Last, but not least, Twinkle Twinkle Little Star – a folk song that Sandberg used to perform for his (then) small daughters – combines a “literal” recitation of the tune with an interpolation of Coltrane’s Naima. This is an excellent album, and one hopes that there will soon be more to follow.

Brian Payne - 16 February 2020
American trumpeter and composer Charlie Porter won first place in both classical and jazz divisions of the United States National Trumpet Competition. Downbeat has described him as a technical...