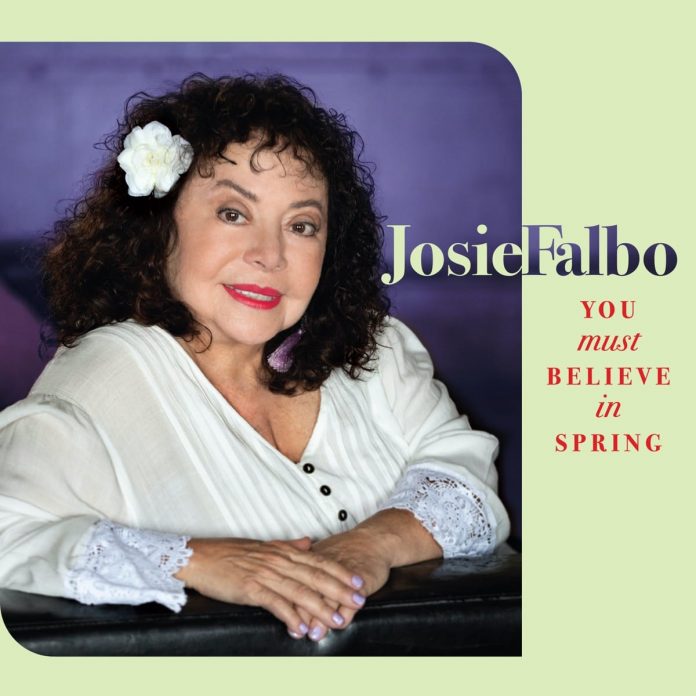 This bakers’ dozen of an eclectic mixture of standards and newer material has garnered positive reviews verging on the ecstatic that frankly leave me feeling bemused. Don’t get me wrong, there is nothing wrong with the pipes but neither – to my ear at least – are they as exceptional as the reviewers imply; she doesn’t stray beyond the stave or, to put it another way, she doesn’t venture below the E or above the F of Every Good Boy Deserves Favour which is, I suppose, fair enough.

She sings in tune, mixes ballads with bouncers and scats passably on a couple of tracks. I think, in all fairness, the problem lies in the schism that fractured the popular music scene some 60+ years ago; female vocalists prior to that time – Jo Stafford, Dinah Shore, Doris Day, Helen Forest, etc (I’ve purposely omitted “jazz” singers such as Billie Holiday, Sarah Vaughan, Ella Fitzgerald) – had distinctive styles unique to themselves whereas Ms Falbo, through no fault of her own, sounds like a dozen other contemporary vocalists.

I’m guessing the people who praise her are from a younger generation with little or no knowledge of and/or interest in the female vocalists I namechecked.

The songstack embraces Michel Legrand’s lovely title tune through Rodgers and Hart’s Manhattan taking in A Night In Tunisia and Just You, Just Me, along the way. Nostalgics will kvel at the namechecks in Midnight At The Starlight Haunted Ballroom, a number new to me.

Apparently Ms Falbo is a native of Chicago and the 50+ player orchestra behind her is loaded with the Windy City’s top session men including pianist Jeremy Kahn and Jim Massoth on tenor. The charts, which are out of the right bottle, are down to Carey Deadman, who also produced.

Discography
You Must Believe In Spring; A Night In Tunisia; Joy Spring; A Flower Is A Lovesome Thing; A Sleepin’ Bee; Manhattan; Heaven; Just You, Just Me; Midnight At The Starlight Haunted Ballroom; Estate; Devil May Care; Tis’ Autumn; Tristeza (56.19)
Falbo (v) with 50 + orchestra
Southport Records S-SSD 0150

Barry Witherden - 03 January 2022
… EDQ standing for the Elton Dean Quartet. Formerly, Dean had been a member of Tippett’s classic sextet, and Moholo-Moholo notably powered the Chris McGregor Group. These were two...