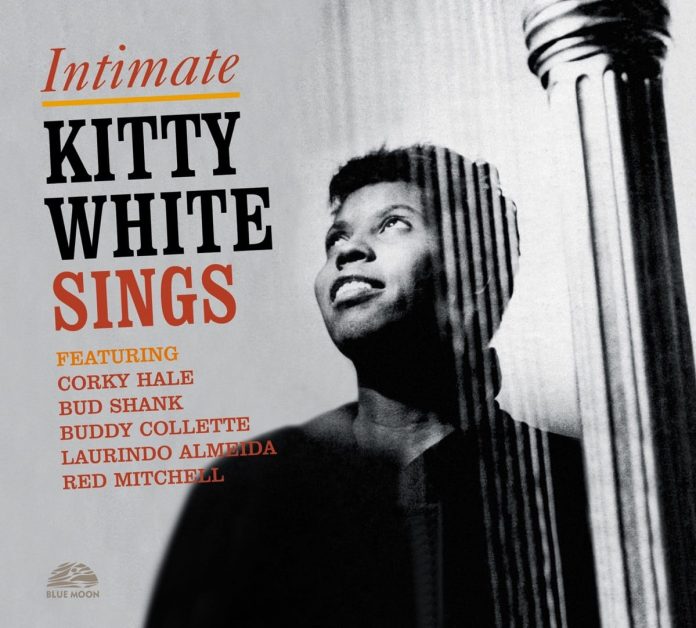 A rich and often divisive time in popular music, the late 1950s and early 1960s saw many singers whose work was centred on jazz and/or classical popular music sidelined by rock and pop. Among these singers is Kitty White, although perhaps “sidelined” is an unfair word to use.

She was born Kitty Jean Bilbrew to musical parents in Los Angeles, 7 July 1923. Her mother, A.C. Bilbrew, led a chorus that appeared in an early film, Hearts Of Dixie (1929), and her twin sister briefly understudied Ivie Anderson in Duke Ellington’s Jump For Joy.

Beginning to perform as singer and pianist while still in her mid-teens, Kitty worked mostly in Los Angeles although it was an appearance at Chicago’s Black Orchid club that attracted the attention of recording companies. By this time she had married songwriter Eddie White and from 1955 to 1966 she made albums and also sang on the soundtracks of a few films, including Night Of The Hunter (1955). She dubbed for Mady Comfort in Kiss Me Deadly (1955), and in the opening sequence of King Creole (1958) she appears (unbilled) singing Crawfish in duet with Elvis Presley. A few years after the second of the recording dates heard here, White settled in Palm Springs where she had a regular engagement at the Spa Hotel that continued into the early 1980s.

The songs on the first half of this album are familiar fare from the Great American Songbook. The session stemmed from an impromptu performance for a gathering of friends at Corky Hale’s apartment. Among those present was Richard Bock and it was at his suggestion that they reconvened at the same place a week later with once again a few friends in attendance to record. In his liner notes for the original LP release. Bock states that there were neither rehearsals nor arrangements, which makes the excellent result even more remarkable. With Hale’s rippling accompaniment, White’s warm contralto sound embraces the songs as she delivers stately and sensitive interpretations. Bud Shank appears briefly on three tracks.

The songs on the second album included here are less well known. White’s principal accompanist is Laurindo Almeida, who was named as co-leader with her on the original Horizon release. There are also moments from Buddy Collette, and on Fare Thee Well the singer has only Red Mitchell’s backing. Here again, White delivers commanding performances. Although nothing appears online to confirm this, there are many moments that suggest she had formal and perhaps classical training, notably the second version of Black Is The Color Of My True Love’s Hair and Look Away, both of which are sung a capella.

Because this review is for a jazz readership it should be mentioned that there is nothing in White’s singing that approaches jazz. It is, though, exceptionally well-performed music that many will enjoy. Kitty White died 11 August 2009.

Michael Tucker - 30 July 2019
Every once in a while a record comes along which totally – totally! – confirms one's faith in the surpassing music that is jazz (you know – the music...