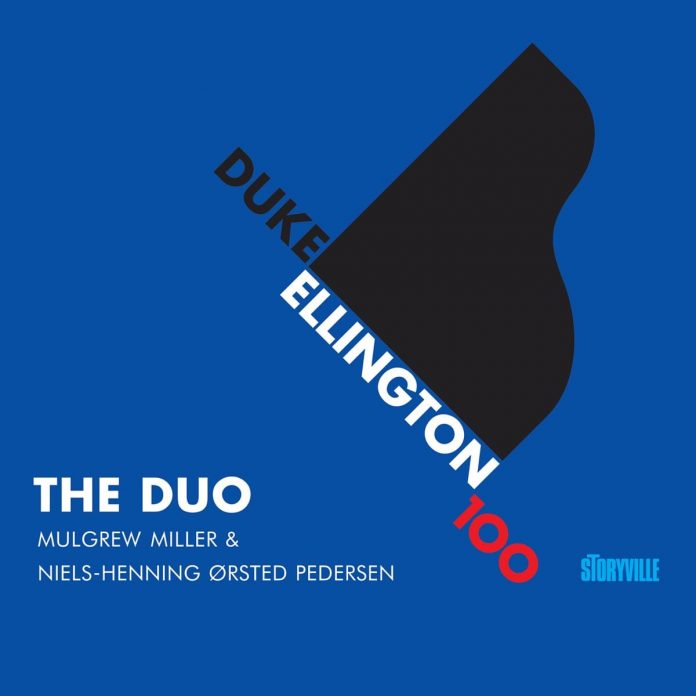 When Per Arnoldi was part of Bang and Olufsen’s think tank back in the 90s, he suggested a series of duo recordings of Ellington’s music, to which the company initially agreed. Duo recordings suited the company’s policy of demonstrating how good music sounded on their hi-fi equipment products. So, the first recording was set up and this disc was taped.

Then B&O suddenly went cold on the idea and so this was the only record made. But even that was never released commercially, until now. The company used the first batch of records to hand out to buyers of their equipment but did no more. Now the music is finally released on Storyville Records as a commercial disc, complete with Arnoldi’s original cover design, seen here for the first time.

Miller and NHØP make a good team for these 12 Ellington selections, blending well together in a give and take fashion throughout. They launch into C Jam Blues enthusiastically, piano chords dominating at first but NHØP contributing a sturdy bass line. They work always as compatible equals. The bassist frequently takes the melody to begin with as his partner provides varied piano backing. Then, about half- way through they change over solo duties.

Pitter Patter Panther will bring back memories of the old Ellington / Jimmy Blanton duets that these selections were inspired by although Blanton was more of an adventurous virtuoso bassist in a line that would include Charles Mingus and Scott La Faro. NHØP was more in the bass tradition of solid accompaniment embodied by the likes of Ray Brown and Oscar Pettiford. These two work very well together though and their sharing out of the solo duties and frequent changes of tempo ensures interest and variety.

Mood Indigo and Come Sunday are standout tracks, played at slow tempo for the most part. Blues In The PM’s is Miller’s composition, his only one and NHØP wrote O.D. Blues. Both men shine in their respective blues lines. Caravan is credited to Duke here, but I believe Juan Tizol had a hand in the composition.

The sound quality is particularly good and must have sounded impressive on those old hi-fi machines back in the 1990s. Now though we can all enjoy the music.

Fred Grand - 28 June 2021
This zinging collection of originals marks the recorded debut of bassist Vetle Aakre Laupsa’s dynamic piano-less sextet. The music was composed while he was studying in Stavanger but is...