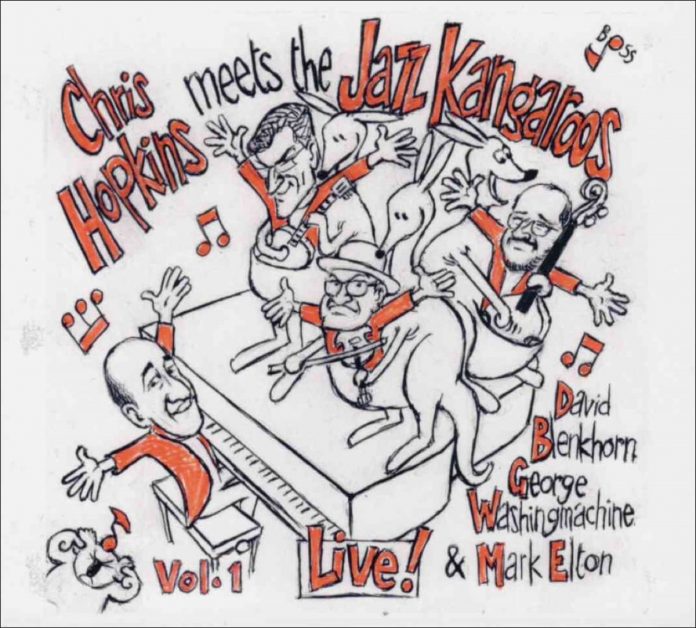 New Jersey born Chris Hopkins grew up in Germany. His recording career has included piano albums for Arbors records, which included the noted trombonist Dan Barrett. I have much enjoyed Chris’ distinctive and creative contributions, as altoist, arranger and composer, on the excellent Echoes Of Swing recordings. Here he is back on piano in an entirely different setting, in a live concert, and with three talented Australians for company.

Fronting the quartet is the memorably named violinist George Washingmachine. (I first heard George on a Bob Barnard Jazz Party recording from 2002). Swinging smoothly with spirit and relaxed assurance, his lead, evocative of Stuff Smith, integrates comfortably with the overall sound. He is also a good vocalist, and contributes four enjoyable vocals which hint a little at some illustrious predecessors – Sinatra, Rushing and Teagarden. Both violin and vocals impress in a lively Russian Lullaby, a very good track all-round.

Chris Hopkins sounds as impressive and articulate on piano as on alto, his responsive backing and crisp elegant solos reminiscent of earlier masters such as Sir Charles Thompson and Teddy Wilson. His ballad playing particularly appeals, in A Hundred Years From Today and What Am I Here For.

Guitarist David Blenkhorn’s fluent and creative solos with Evan Christopher’s Django A La Creole group have previously impressed me greatly, and  he doesn’t disappoint here. His phrasing, nimble and often audacious, is fired up in Blue Lou, Russian Lullaby, Fine And Dandy, and a nicely harmonised arrangement of Django’s Swing ’42. He also excels in a fine duet version of Oscar Pettiford’s Blues In The Closet with bassist Mark Elton, whose full-toned, accurate and propulsive bass lines provide a rhythmic drive which ensures that drums are never missed.

All in all, highly enjoyable small-group jazz of top quality, with more volumes presumably to follow.

Discography
Can’t We Be Friends; Blue Lou; Moonlight In Vermont; Russian Lullaby; Swing ’42; A Hundred Years From Today; Blues In The Closet; What Am I Here For?; When Lights Are Low: Fine And Dandy (53.48)
George Washingmachine (vn, v); Hopkins (p); David Blenkhorn (g); Mark Elton (b). Hattingen, Germany, 17 and 18 July 2019.
Echoes Of Swing Productions EOSP45122

Bruce Crowther - 15 January 2020
Working extensively in New York City from around 1954, this fine artist performed first in clubs, restaurants and bars as a pianist-singer. She also made demos for songwriters, was...