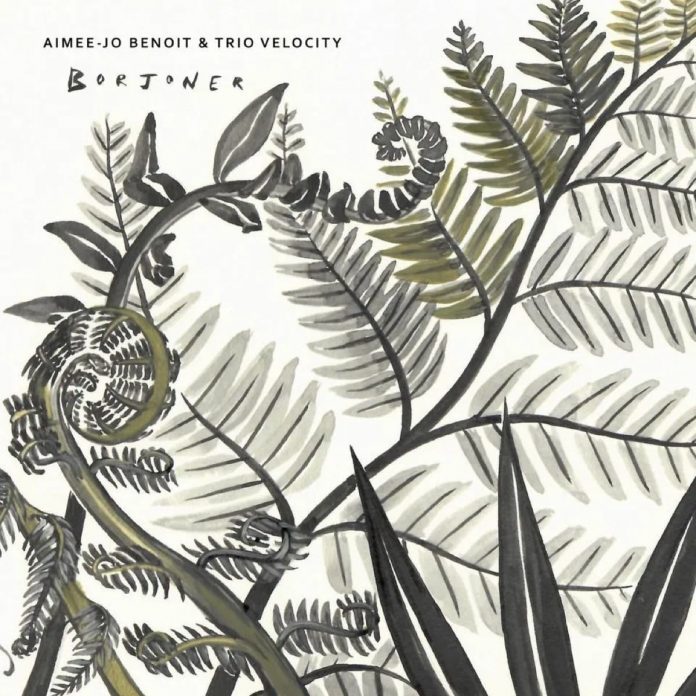 A new voice internationally, Aimee-Jo Benoit is based in Calgary, Alberta, where she now works on the local jazz scene, having previously sung as back up with folk-pop groups, and she also studied with the classical tenor Leon Leontaridis. This release, on which she is accompanied by Trio Velocity with whom she performs locally, appears to be her first own-name album.

Benoit has a very pleasing sound, warm with a touch of huskiness, clear diction, admirable phrasing and a relaxed sense of swing. As can be seen, she has drawn her repertoire from many areas of popular music, including songs by Kurt Cobain, Joni Mitchell, John Lennon & Paul McCartney, Burt Bacharach & Hal David, and Sonny Burke, Lionel Hampton & Johnny Mercer.

The songs all reflect aspects of Benoit’s life, as a listener and as a performer, the renditions being collectively described as a “loosely arranged, somewhat improvised selection of tunes closest to the heart of the vocalist’s musical journey.” In most cases, Benoit and her accompanists take an original approach, making them not so much covers as jumping-off points for effective variations.

Among these are Cobain’s All Apologies, which is transformed into a light and airy song quite unlike the dark original; Lennon-McCartney’s Norwegian Wood is taken at a very slow reflective tempo; Burke-Hampton-Mercer’s Midnight Sun is moved half a world away from its Arctic origins to become a sunny and lively Latin American dance.

Especially attractive are Kate Fenner and Chris Brown’s Exquisite Corpse, Jane Siberry’s One More Colour and Leslie Feist and Tony Scherr’s Lonely, Lonely. The accompanying trio are very good throughout in their collaborative approach, and there are several excellent solos from pianist Sheldon Zandboer.

Attractive and often moving music by a singer to watch out for, although given that she is the mother of three young daughters hearing her live might be a problem for all but the residents of Calgary. The rest will have to settle for hearing her online. By the way, the album title appears to be an old French horticultural term for “putting out buds”.

John Adcock - 07 May 2022
This is New York based bassist and composer Alex “Apolo” Ayala’s debut album. It celebrates Afro-Puerto Rican culture, and also explores Ayala’s sense of heritage, the importance of family,...