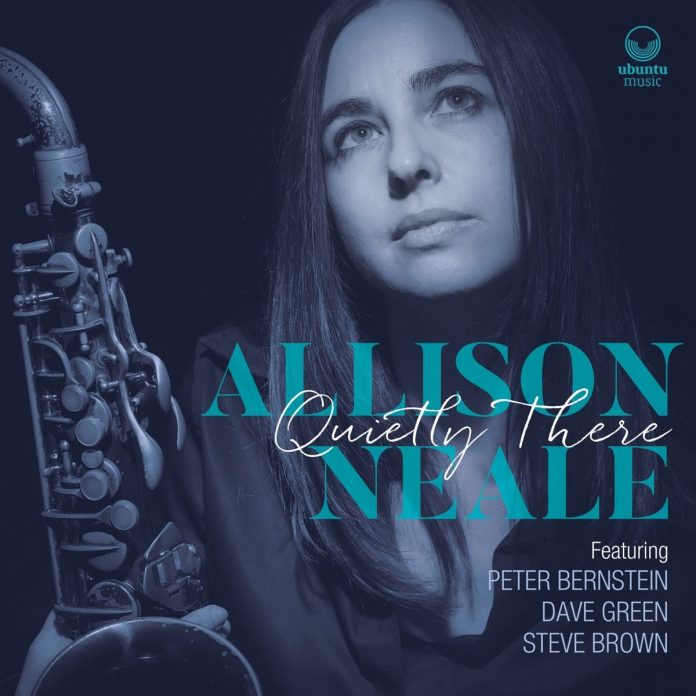 Allison Neale was born in Seattle on the west coast of the United States but grew up in Northamptonshire when her family moved to the UK. From a young age she listened to her father’s records of artists such as Paul Desmond, Stan Getz and Art Pepper and assimilated their styles when she later took up the alto saxophone.

This is her fifth album. It follows Melody Express with guitarist Dave Cliff (2002), Blue Concept with trumpeter Gary Kavanagh celebrating Gigi Gryce (2006), I Wished On The Moon with vibraharpist Nat Steele (2014) and Then And Now with reeds player Chris Biscoe reinterpreting the piano-less recordings of Gerry Mulligan and Paul Desmond (2015).

Neale says she’s always enjoyed the space and openness that playing with guitar enables, just as she did on Melody Express, and this time she’s partnered with New York guitarist Peter Bernstein. Bernstein has worked with Jimmy Cobb, Lee Konitz and Jim Hall amongst many others. The making of Quietly There was motivated by his and Neale’s joint appreciation of Paul Desmond’s musical partnership with Jim Hall. Eight of the album’s 11 tracks are arrangements of less commonly heard numbers from the American songbook. The other three are those of Horace Silver’s Split Kick, John Lewis’s 2 Degrees East 3 Degrees West and Jimmy Raney’s Motion.

Neale’s melodic delivery throughout this fine album is totally assured. She describes the music as quiet and understated “with the flavour of her influences” and in this regard, whilst her tone is very much her own, it particularly resembles Desmond’s cool and relaxed sound. On Bernstein’s part, his playing is quite remarkable. With his harmonic inventiveness, albeit a little over-complex at times, he can sound like two guitars at once. The reliable and empathetic rhythm team of Dave Green and Steve Brown provide sure-footed and swinging support. Green’s sonorous bass soloing is immaculate and Brown as always is subtly dextrous on drums.

In today’s often tuneless and unmelodic landscape, Allison Neale’s new album is a real breath of fresh air. And the more you listen to it the better it gets.

Discography
Darn That Dream; Midnight Sun; Split Kick; Quietly There; I’m Glad There Is You; Motion; Spring Is Here; Lollipops And Roses; 2 Degrees East 3 Degrees West; You Do Something To Me; I Should Care (62.14)
Neale (as); Peter Bernstein (g); Dave Green (b); Steve Brown (d). London, 2020.
Ubuntu Music UBU0062

Scott Kinsey: We Speak Luniwaz – The Music Of Joe Zawinul