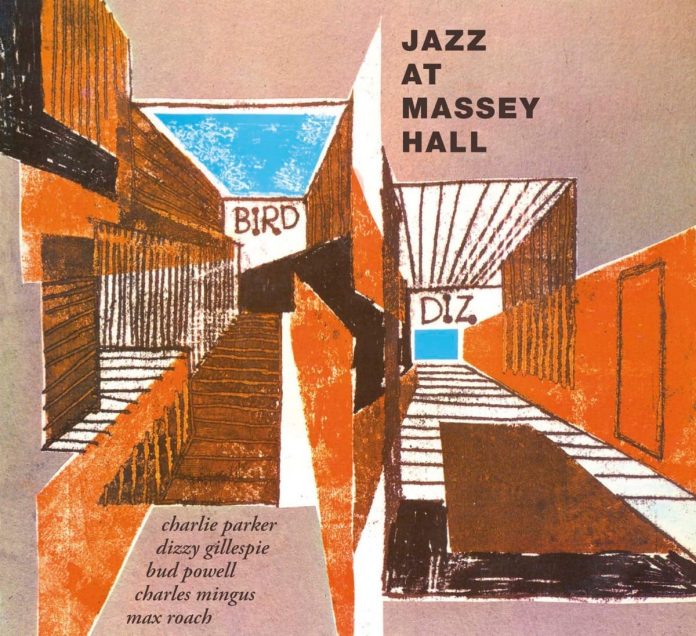 This music has, of course, appeared many times, first as The Quintet on the original Debut Records release, later as Jazz At Massey Hall and other titles. Now it appears as Parker’s record, although this was originally a reunion of what were considered the top bebop players of the day. Fraught with difficulties from the beginning, the concert was poorly advertised and only managed to sell 700 seats in the massive, 2,500 seat Massey Hall in Canada. Plane tickets to the venue were not all at the airport so Parker and Gillespie stayed behind to catch a later plane when the error was rectified.

Thinking about it now, it is a miracle that Bird and Diz arrived at all. Bird turned up without a horn, not an unusual occurrence, so a swift trip to a local instrument shop was made to secure a white, plastic alto sax for him to play. You might think that was enough, but the concert had been booked on the night of a heavyweight boxing tournament and Parker and Gillespie were frequently running on and off stage to watch progress on television.

Despite all obstacles the musicians played magnificently throughout with Parker on imperious form, quoting from all his favourite tunes including the Kerry Dancers. Dizzy settled on Laura, popular at the time. Salt Peanuts was a tour de force with Bird and Diz improvising creatively on extended solos and Max Roach having a long workout. Perdido is a standout track and All The Things is treated as a warm, ripe ballad. Wee and Hothouse join Night In Tunisia to complete the bop staples, great performances all. Not that I’m saying much that hasn’t been said, in one form or another, hundreds of times before.

I had understood that this concert began with the trio performances with the quintet playing the second half but the notes here state that it is played on this release in concert order. So, we get three by the quintet followed by a solo Drum Conversation from Roach and then six trio performances by Powell and rhythm. These match the standard of invention of the quintet and the five-piece band end with four final selections. Almost. Mingus added Bass-ically Speaking with dubbed in applause, as though it was part of the concert, but it wasn’t. It was a later studio recording but it is included here.

This release is a winner because it presents the music as recorded originally and without the dubbed in bass parts that Mingus added before release because he wasn’t happy with his recorded bass sound. The music sounds fresher and more natural than on all previously released issues and is strongly recommended, particularly to anyone who does not have it already and those with seriously worn out vinyl or bad early CDs. This is a great jazz classic and should be on every jazzer’s record shelves. And sounding great with Mingus’s ego antics removed.

Andy Hamilton - 10 December 2020
The recent news that the pianist suffered two strokes in 2018, that have most likely ended his performing career, makes this release a poignant one. It's a double CD...