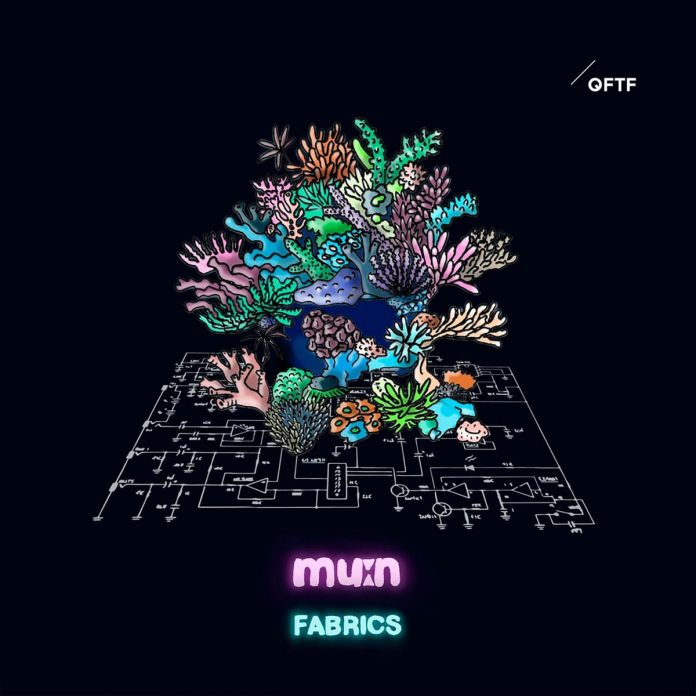 This young Swiss quartet started out under the name of MÈNE but changed its moniker to mu:n perhaps to signal a briefer, more cryptic abbreviation of their leader’s name than the previous one. Djamal Moumène, who wrote all the compositions on this debut album, studied music at Zurich University of the Arts and is a fine guitarist. His style and tone, certainly as revealed on Fabrics, are not dissimilar to that of the late John Abercrombie, characterised by swirls of glissandi and jangly, echoey runs of notes.

His fellow bandmates comprise a vibrant contingent of the contemporary Swiss jazz scene. Tobias Pfister is an in-demand saxophonist and member of the Zurich Jazz Orchestra and is also an alumnus of Zurich University of the Arts. In addition to his work with mu:n, bassist Vito Cadonau is a member of Qataraqt and WHC-Trio. Drummer Noah Weber’s academic career has been illustrious; he initially studied at the Jazz School Basel and Lucerne University of Applied Sciences. In 2019 he completed a Master of Arts in Performance including an exchange semester in Ghent and is currently studying for a Master of Arts in music education at the Zurich University of the Arts. Pfister, Caonau and Weber are also members of the quintet Ramur along with trombonist Maurus Twerenbold and pianist Kenny Niggli.

Even from the opening track Erasure Now, there are plentiful examples of the quartet’s virtuosity, Weber’s percussive fanfare heralding convincing guitar from Moumène countered by Cadonau’s deeply resonant double bass and Pfister’s wave-like tenor. The sense of wistful lyricism also spans much of the record’s hour-plus performance.

But there are some notable exceptions. Illuminating features the whispery vocals of Ursula Bachman and Image Immobile showcases Sophie Adam’s spoken poetry in French. These however are the only two tracks with words. Of the album’s other outliers, Fragile is a short vehicle for Pfister with only the lightest of accompaniment. Planets is a sparse outing for Moumène, whose limpid, plangent lines reverberate throughout the piece. Glatsch presents an opportunity for Cadonau to play a spacey, arco solo, reminiscent of virtuoso bassist Barre Phillips. Finally, Weber gets to unleash a tastefully restrained cavernous performance which segues into the gently building closer SHI(F)T which ultimately concludes in an uplifting crescendo and sudden ending.

Taking the lead on both the flute, vocals and most of the words and music for this album, Siril Malmedal Hauge demonstrates a great...

Before leaving the UK for the USA in 1976, Bob Efford had become one of the most sought after session players in town. He...

In 1959 Metronome published what it called “The All Time All Star Poll”, which was won by Charlie Parker with Miles Davis and Gerry...

This book is indispensible to Miles Davis collectors and to anyone with an interest in the trumpeter. It is cheaply priced for such a significant...

If one must categorise, I suppose the Silver Quintet epitomises "funk". The solo honours are about equally divided between Horace, Blue Mitchell and Junior...

"Djamal Moumène, who wrote all the compositions on this debut album, studied music at Zurich University of the Arts and is a fine guitarist"Roger Farbeymu:n: Fabrics
Advertisement