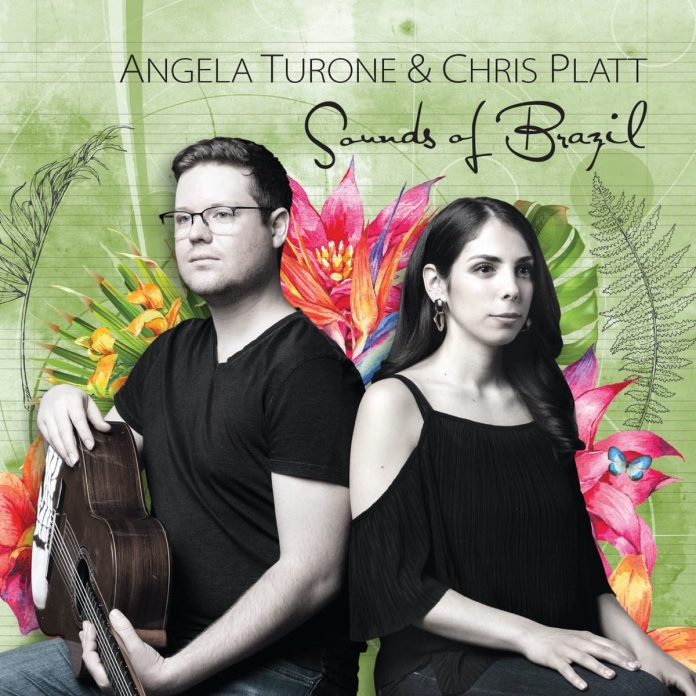 Since the 1960s, Brazilian music has had a huge international audience and continues to find new devotees. In this instance, it is performed by young Canadian artists, Angela Turone and Chris Platt, who have been jointly displaying their affection for this musical genre since 2014.

They play with skill, their instruments blending smoothly on a selection of titles that draw upon the genre’s many composers, among whom the most distinguished heard here is Antônio Carlos Jobim. Three of his songs are here (with different lyricists): Desafinado, A Felicidade, Chega De Saudade.

There are two songs from outside the genre – Pawnbroker, by Quincy Jones and Jack Lawrence, and Bewitched, by Richard Rodgers and Lorenz Hart. Despite their origins, these songs are performed in a similar style and both take the transition well.

Many of the female singers who perform Brazilian music do so in a light and airy manner and this applies also to Turone who has a fresh, youthful sound. Her piano playing is also good, as indeed are the other instrumentalists heard here.

There are effective solo moments from Chris Platt, Chase Sanborn and John Nicholson. Throughout, the front line is buoyed by the rhythm section of Platt, Pat Collins, Robin Claxton and Hélio Cunha. The effective ensemble sound is filled out by Andrew Downing’s cello.

Delicately played and sung, this is pleasing, summery music.

Yet another name to add to the roster of “jazz singers” is the London-based Juliet Wood, who has assembled an interesting array of tunes...

During the 1940s Serge Chaloff, along with Leo Parker and Cecil Payne, showed how successfully the baritone saxophone could adapt to the intricacies of...

This album is a significant one in the Evans discography, for it dates from the time when he was introducing electric (and later electronic)...

Angela Turone & Chris Platt: Sounds Of Brazil"They play with skill, their instruments blending smoothly on a selection of titles that draw upon the genre’s many composers ... Delicately played and sung, this is pleasing, summery music"
Advertisement