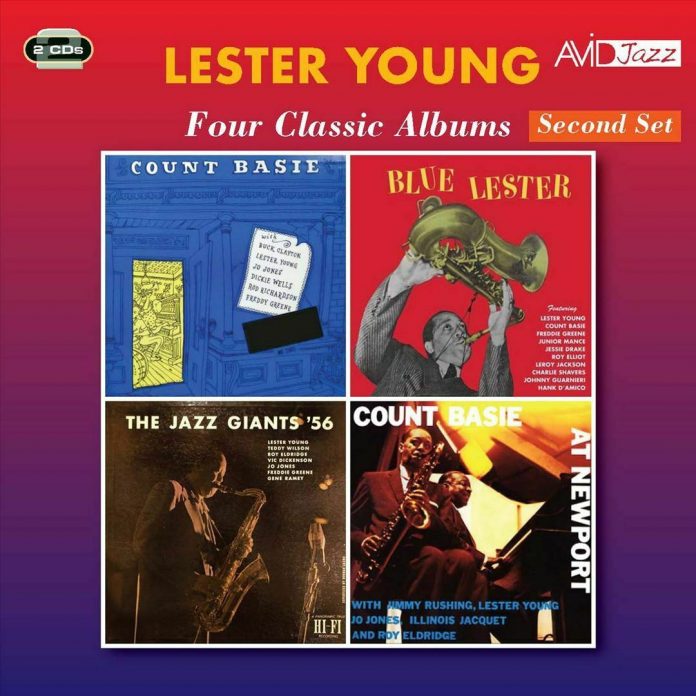 I envy anyone hearing these four albums for the first time. The first, as presented here, is exactly the same in content and running order as a 10-inch Mercury LP I bought in (I think) 1957, and still treasure. Strictly speaking, it’s not quite complete; there exists one further track (Six Cats And A Prince) from the Kansas City Seven date, but you can dig that out later.

The KC7 was, of course, a small group from the Count Basie orchestra, and Lester Young, having left in 1940, was back with Basie after a disappointing three years of false starts. The Seven consisted of the big band’s rhythm section plus its three outstanding soloists: Lester, Buck Clayton and Dicky Wells. Confident, relaxed and at the height of their powers, they represent swing at its mature and eloquent best.

The following four tracks, recorded a few months earlier, are the first to feature Lester in what was to become one of the principal jazz formats – a quartet of soloist plus piano, bass and drums. In the three standards here he keeps the original melody in sight throughout, expanding each with gentle variations, Sometimes I’m Happy being especially touching. The remaining quartet number, Afternoon Of A Basie-ite, is an uptempo blues that swings mightily, with some gorgeous piano from Johnny Guarnieri. Slam Stewart’s bowed-bass-plus-humming trick, a novelty that soon palls, is the price we have to pay for his superb rhythm playing.

The 12 tracks on the second album (tracks 8 to 19) are the work of three sessions, two from 1944 and one from 1949. For some reason they have been shuffled into a random order. The first is an undoubted masterpiece. Recorded in May 1944, Ghost Of A Chance is the first slow ballad of Lester Young’s recording career. It’s brief (48 bars in all), severely simple, and expressive of the deepest melancholy, tinged with resignation. Accompaniment is by the complete Basie rhythm section, which comes into its own on the other three pieces, especially Indiana.

The second track comes from the 1949 session and three of the numbers are actually different takes of the same blues: Crazy Over J-Z, Blues ‘n’ Bells and June Bug. The other, Ding Dong, is an improvisation on the chords of All Of Me. The total number of complete takes from these two numbers was 10, and Lester’s solo was different each time. It’s a great session, sparked by the drumming of a very young Roy Haynes. The remaining four tracks are the earliest, dating from April 1944. There’s a wonderful half-chorus from Lester near the start of These Foolish Things (one of his favourite tunes) and, once again, sparkling piano from Johnny Guarnieri.

Jazz Giants ’56, which opens the second disc, is the companion album to Pres & Teddy, which was included in the first of Avid’s Four Classic Lester Young compilations. Just like that one, this session has a distinct air of “down Memory Lane”. With old friends like Jo Jones and Vic Dickenson aboard, it was bound to. Lester was usually a bit suspicious of that kind of thing, but clearly enjoyed this one.

The choice of tunes, especially the final two, is interesting. It’s likely that the last time he’d played This Year’s Kisses was on Billie Holiday’s record in January 1937, and You Can Depend On Me with Basie in 1939. Whose choices were they, I wonder? Whatever the case, the album is a classic of its kind. I’ve enjoyed it for years – no, decades!

The final album, recorded live at the 1957 Newport Jazz Festival with the Basie band of the day, is a Memory Lane affair, too. In fact, one of the most interesting things about it is just how far back the collective memories of Lester Young, Jo Jones and Jimmy Rushing could reach. All three had taken part in the very first recording by a Basie band, on 9 November 1936, when two of these numbers, Boogie Woogie and Evenin’ were played. It was obviously a happy occasion; everybody plays well and Rushing, in particular, seems to have been having the time of his life. Lester would not have many more such happy times.