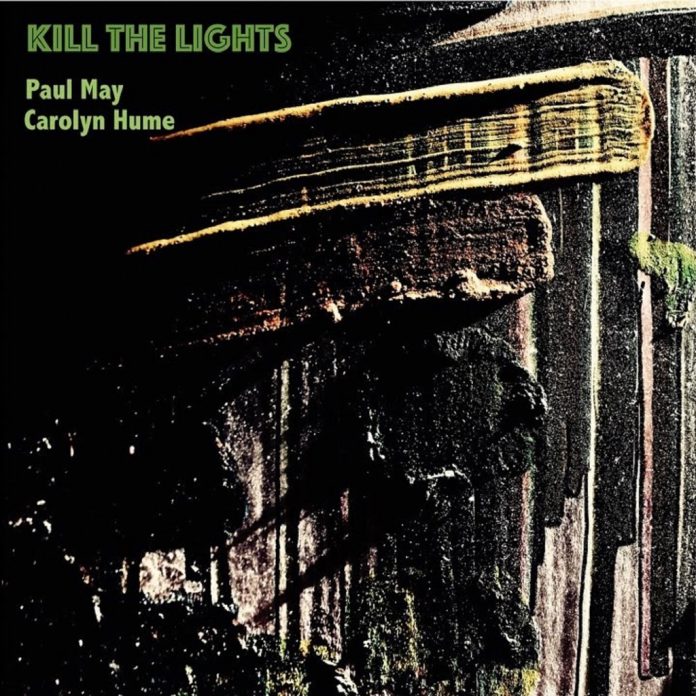 This duo has been operating for 20 years, sometimes with other hands involved, mostly, though, in an idiom quite of their own. Waltz For Debris on the excellent By Lakes Abandoned suggests that a sense of humour is not entirely absent and, indeed, that impression is reinforced by even a brief exposure to that CD, its predecessor Zero or successor Flames Undressed By Water. There have been two more discs since then – Wet Map in 2003, and Come To Nothing, recorded in the spring of 2009 – and then something of a silence.

It’s worth stressing this, and the nature of the earlier work, because Kill The Lights feels (to me, at least) something like a departure. It isn’t that one expects Hume to break into Waltz For Debby at last, but the impression is of a language closer to jazz and more remote from the abstract pastoral of earlier sets. The emphasis is still clearly free improvisation, with May’s drums often resolutely declining to produce any kind of countable pattern, but there has always been a songlike pulse in almost every Hume/May performance, so it perhaps isn’t surprising that it should have surfaced here.

With the introduction of guitarist Bernd Rest on Surrender, the group again achieves something that sounds melodic and structured towards a particular destination, but the other, duo tracks point this way too, so Rest (any more than any of his predecessors) isn’t any kind of normative presence but rather a sharer in the duo’s unique sound-world, which combines keyboard sound with “intimate metals” – non-idiomatic percussion terminology is always awkward: think of “charged surfaces”, “hitty things” … – and on The Blacksmith And The Butcher’s Wife and the title track a definite sense that jazz and folk forms are part of the genetic make-up of this music.

It’s anything but winsome. May looks like he could dep for any of your heavy-metal heroes and Hume’s personality and playing shine with beauty and intelligence. If you’ve never made their acquaintance before, this would be a very good place to start, without any recognition that the sound has changed more than a little. If you’re an established fan, there’s nothing to fear and everything fresh to discover. (Incidentally, they’re both involved in the consecutively numbered Leo release The Forest From Above, as members of Fourth Page, with Charlie Beresford and Peter Marsh, also their fourth disc and also well worth sampling.)

Click here for more information on Paul May & Carolyn Hume: Kill The Lights

Roger Farbey - 29 December 2020
The self-coined in-joke about this international quartet is reflected in its name. With two members of the group hailing from the USA, one from Germany and one from Switzerland,...