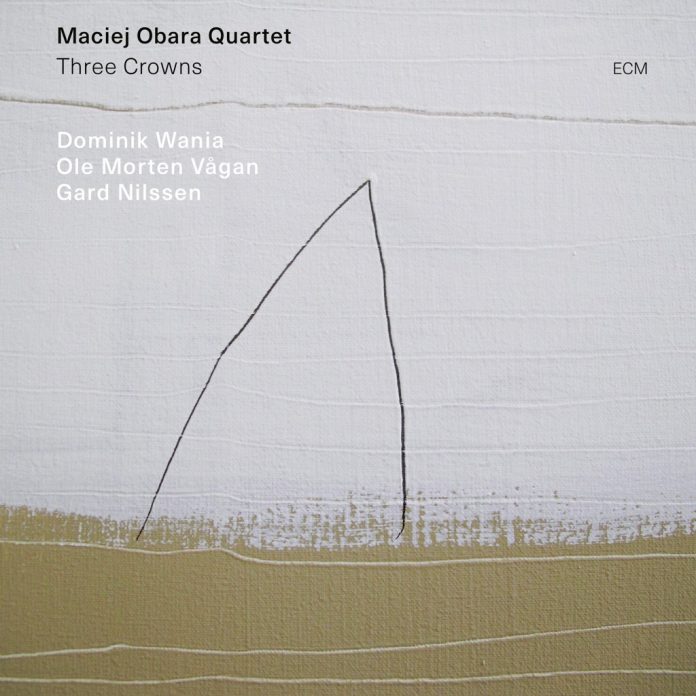 Reviewing Obara’s 2018 ECM debut Unloved was one of the unexpected pleasures of the last decade. Here was an artist steeped in the music of the label’s 70s heyday, playing with the authority of someone many years his senior. Of course the 38-year old saxophonist hadn’t simply arrived from nowhere. Long before joining the ECM stable Manfred Eicher recommended Obara to Tomasz Stanko for the New Balladyna quartet. His recording career launched with a series of trios and quartets from the mid-2000s, and in addition to appearing with adventurous American underdogs such as John Lindberg, Joe Fonda and Harvey Sorgen, Obara recorded three albums for the small Polish label For Tune with an expanded version of this group featuring Tom Arthurs.

In case you are wondering, the title Three Crowns is inspired by the Trzy Korony mountains in southern Poland. Very much a continuation of Unloved, this lines up six new Obara originals alongside “free arrangements” of two compositions by Henryk Górecki. Obara came to know Górecki’s family while living in Katowice, and this is the first time an improviser has been officially sanctioned to interpret his works. The haunting Three Pieces (1963) is based on a simple folkish melody freighted with sadness, Obara’s pinched Garbarek-like tone transforming the piece into a perfectly spine-tingling Scandi free ballad. Little Requiem (1993) by contrast is altogether more spare, Wania’s sombre introduction perfectly preparing the ground for measured solos by Obara and bassist Ole Morten Vågen.

Elsewhere it is virtually impossible to single out highlights, though several pieces do stand slightly prouder than the rest. The long and dramatically unfolding Blue Skies For Andy finds the saxophonist at his most mercurial, a widescreen homage to his late father who spent many years playing in the Roma community. Nilssen’s rolling thunder intro to the title track sparks some extrovert if somewhat off-kilter free-bop, Glow incorporates long passages of free association within the ghostly outlines of it compositional structure, while the closing Mr S. pays a fittingly elegiac tribute to the late departed Stanko.

Already looking like one of the year’s essential releases, Three Crowns confirms Obara’s quartet as one of the most exciting prospects in contemporary jazz.

Nigel Jarrett - 25 October 2021
The child addressed in Russian pianist Marinchenko's super album is her inner one, so the nine compositions are autobiographical and cathartic. As such and as so often when music...