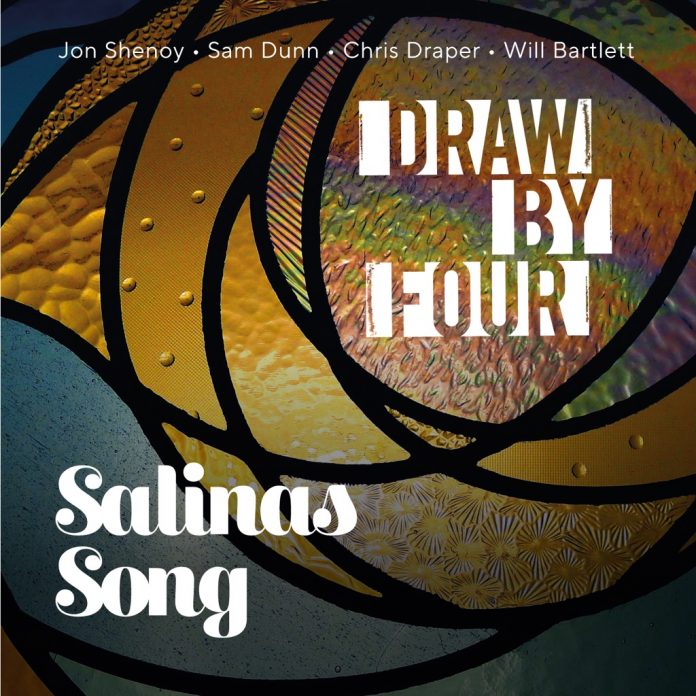 Draw By Four release their second album Salinas Song, following their 2018 debut Framework. Led by saxophonist Jon Shenoy, this traditional quartet lineup sticks to its roots while incorporating modern styles in both composition and sound.

The opening track, Dunnundrum, is a quirky, angular piece, with guitarist Sam Dunn adding some John Scofield style playing to the mix, while saxophone takes the melody and both occasional working together in unison. The second track changes direction well, into a laidback, searching piece led by Shenoy on tenor saxophone. Whisky And Wry continues to utilise the traditional jazz quartet with more unison, before a guitar solo reminiscent of Grant Green or Kenny Burrell; Chris Draper’s drumming also stands out with crisp fills. On the fifth track, Kilgore Trout (a reference to the work of author Kurt Vonnegut), Will Bartlett’s Hammond organ adds a definitively 60s vibe to the bossa-nova groove, which also features more fantastic unison between saxophone and guitar. The penultimate track, Pedal Power, changes back to the contemporary with organ and guitar drenched in echo, and a more experimental approach from Shenoy and Draper in their playing. The same energy is present on the final song, Estuary Boogie; that brings to mind early Weather Report, especially in the speed and complexity of the bass.

Recorded in Gloucestershire at the end of 2018, Salinas Song is an enjoyable and polished set. Fans of the classic mid-century jazz quartet, as well as those fond of a contemporary twist, will definitely enjoy the album.

Andy Hamilton - 07 September 2021
Gary Bartz, born 1940, is one of the great alto saxophonists of the post-bop era. His 1968 album Another Earth, featuring featured Pharoah Sanders and Charles Tolliver, had synthesised spiritual and space...