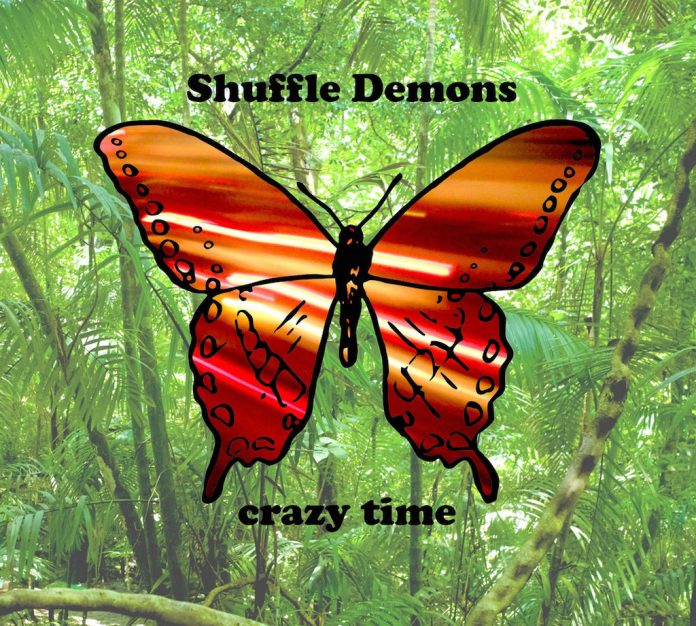 Crazy Time, the Shuffle Demons’ first album in six years, features 10 original tracks, nine of which written by Juno award winner Richard Underhill and the other by Kelly Jefferson. As the group celebrate their 35th anniversary, original band members Mike Murley and Jim Vivian are invited for a memorable return on five of the 10 tunes. Having brought back old faces, the band also welcome newcomers Matt Lagan on tenor saxophone and bassist Mike Downes.

On this ninth album from the Shuffle Demons, avid followers will be greeted by “modern jazz instrumentals” accompanied by familiar grooves featuring spoken vocals as well as rap. Rather than using my own term to describe their music, I’ll follow the Shuffle Demons, who refer to the sound as an integration of funk and free jazz.

Amongst the highlights in this positively invigorating album is the opening track, Cat Walk. Starting with this introductory pedal, the band then leap into an energetic format of funky lines and colourful solos. Let It Go, a track which begins with the horns in rhythmic unison before breaking into this steady groove, is accompanied with heavily processed vocals sprinkled with bluesy riffs on the saxes. Blue Chameleon, the final track on the album, is a fitting piece bringing the album together as a whole. With its medium-swing shuffle and once again bluesy riffs, this composition reinforces the sense of optimism that Crazy Time creates through its wide array of styles.

Crazy Time is an enthralling piece of work which captivates the essence of hard-driven modern jazz with the addition of a unique vocal style. Although in recent years, audiences have questioned their visual approach to jazz, there’s no taking away from the Demons’ ability to provide a great sound. An admirable release by the illustrious Shuffle Demons.

Crazy Time is available on bandcamp, cdbaby and Spotify. Keep up to date with the Shuffle Demons at shuffledemons.com and @ShuffleDemons on Twitter and Instagram