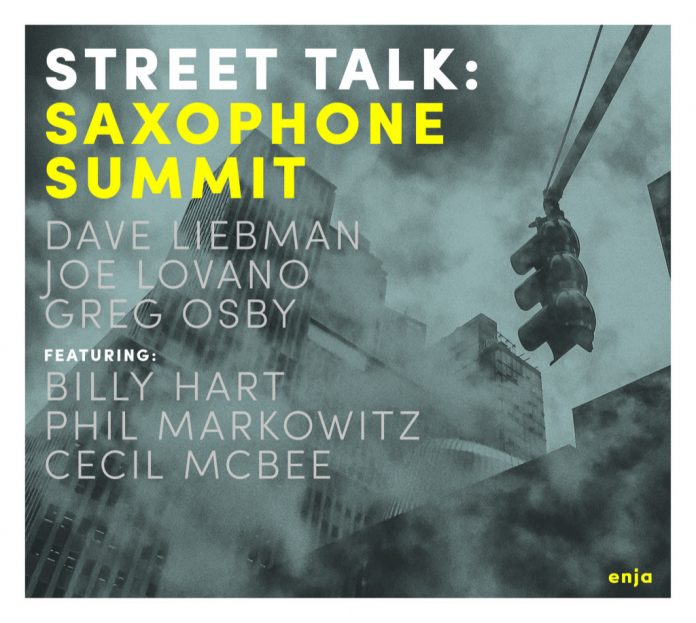 This group have been in existence for 20 years, originally formed to celebrate the later music of John Coltrane. The personnel has stayed the same during that period apart from the late Michael Brecker being replaced by Ravi Coltrane who in turn was succeeded by Greg Osby, the latter being a founder member of the M-Base Collective, whose inception now seems a long time ago. Hence we have not only quality to absorb but also longevity – Osby is the youngest, in his 50s, Cecil McBee well into his 80s.

The shadow of Coltrane does not dominate their music, for we are talking about distinctive stylists across the trio of saxophonists whatever their personal debt to the great man. Lovano gives us plenty of quirky twists and turns, Osby sounds a little less off the wall than he did a couple of decades or so ago and Liebman continues to astound with his continued adventurous sound bending on the straight horn.

The three-saxophone freely improvised Intro and Outro are merely briefly presented bookends for a programme keen to show the composing talents of all the players, although the tempos never rise above medium pace throughout. There are no tear ups or naked displays of unbounded technique.

Ebb and flow is the order of the day, with some nice exchanges – as on the opening to Carousel where Osby and Markovitz weave their magic, and the conversation between the three horns that takes place on the title track prior to a further discourse between them and Hart. This is not necessarily music for the heart but surely exercises the mind.

John White - 09 March 2019
This set from Beat Goes On combines two splendid sessions. On both, the band (with some small changes of personnel) shouts, roars and plays softly, seemingly without effort. Monday Night...