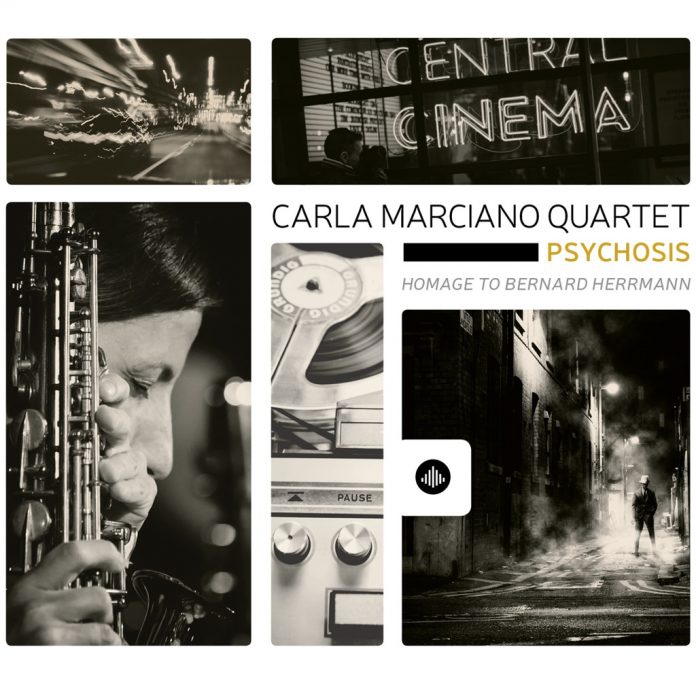 In a better world than this Carla Marciano would enjoy a far higher profile, as would her quartet which with this release has maintained the same personnel since at least 2005, when the Black Saint label released A Strange Day, an album full of fire, tempered with a depth of reflection that eludes a lot of contemporary jazz musicians.

This album’s a little different as it’s a homage to Bernard Herrmann’s film scores, which unsurprisingly turn out to be a lot more than mere vehicles for blowing on. Theme From “Vertigo” (Prelude) is built around a carouselling figure that could be hackneyed in the wrong hands. As it is the quartet achieves just the right measure of unease, and effortlessly, with space enough for “in the moment” work from bass player Fasano.

Theme From “Taxi Driver” (Betsy’s Theme) is in a sense a showcase for Marciano’s alto-sax tone, which retains the Coltrane-esque edge that’s always been a hallmark, tempered by finely tuned restraint. In fact, in this performance alone we get to hear more of the increasingly scarce quality that is individuality, while the following Theme From “Marnie” (Prelude) amplifies the quality with a group performance that also serves and enhances the character of the music.

Marciano carries character over to the rarely heard sopranino saxophone on Theme From “Twisted Nerve” (Theme & Variations) and to the extent that I can only reiterate what I’ve written in the past about the world of difference between James Spaulding’s alto sax playing and his approach to the flute. In short, both musicians are unusually appreciative of the different instrumental characters they have at their disposal, much like I’m unusually appreciative of the qualities of this set.

Psychosis by Carla Marciano Quartet is available from her website carlamarciano.it and from Challenge Records

Mark Youll - 09 April 2021
This inspired compilation from 2005 - a benefit fundraiser for the victims of the Hurricane Katrina landfall in New Orleans in 2005 - was mostly recorded within a month...