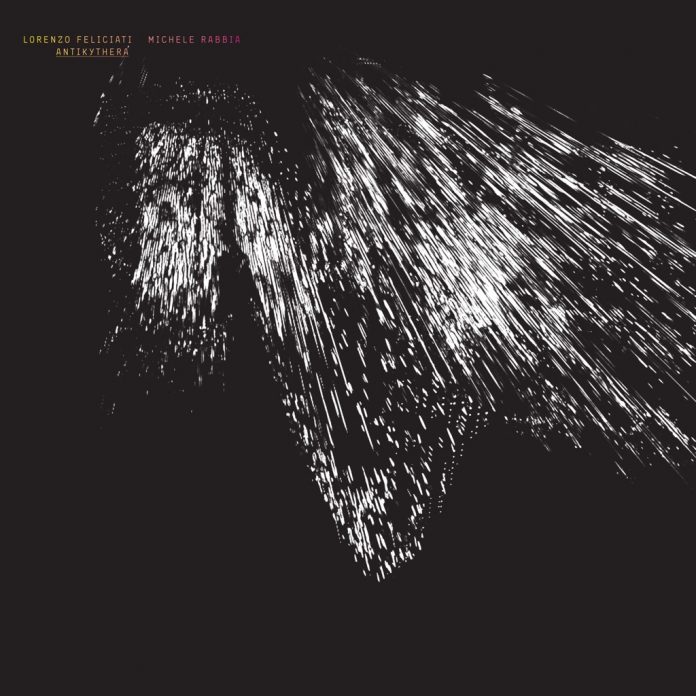 The wide-ranging Feliciati and Rabbia are two of the “happening” names of contemporary Italian jazz. The Pastorius-inspired bassist has played with everyone from Bob Mintzer, Andy Sheppard and Eivind Aarset to Chad Wackerman and Nils Petter Molvaer, while Rabbia’s recent activities run from his contributions to the 2014 Evansiana, an affecting Bill Evans tribute featuring a.o. Paul McCandless and John Taylor, to the more radically cast sound collages of Lost River, an ECM trio date from 2018 with Aarset (elg) and another leading contemporary Italian improviser, Gianlucca Petrella (tb).

The two Italians had long sought a collaborative recording and in Antikythera – named, apparently, after the Greek 1st century astronomical computation device discovered in a shipwreck early in the 20th century – they have come up with a richly textured, pitch-shifting and dynamically vibrant electro-acoustic suite of consistently arresting music.

Apart from his work on keyboards, guitar and electric bass (enjoy his assured, uncrowded sense of line and time on the last in Sidereal) Feliciati is credited with supplying “samples and sound design”: the result can conjure transmuted echoes of the more reflective and exploratory moments of early Weather Report, as in Apogee.

If there are expansive, film-like rubato moods here – epitomised by the growling meditative textures of Corrosion and the initial shifting and shimmering “sound-colours” of Irregular Orbit – there is also plenty of linear stimulus. Hear the cooking development of Orbit, or the now piping, now mellow momentum Sheppard brings to Teeth and Parapegma (on soprano and tenor respectively).

Pat Metheny associate Cuong Vu has diversely striking, spaciously conceived outings on Prochronistic (where Rabbia comes on strong) and Sidereal, while the excellent Marcotulli brings her rhythmically engaging poetic magic to bear on several tracks, on both regular and prepared piano: relish her work on the latter on the ostinato-fired Sidereal, especially.

Peter Gamble - 26 June 2019
John Taylor and Norma Winstone were a potent musical combination on the British jazz scene for a number of years and this live situation, available on CD for the...