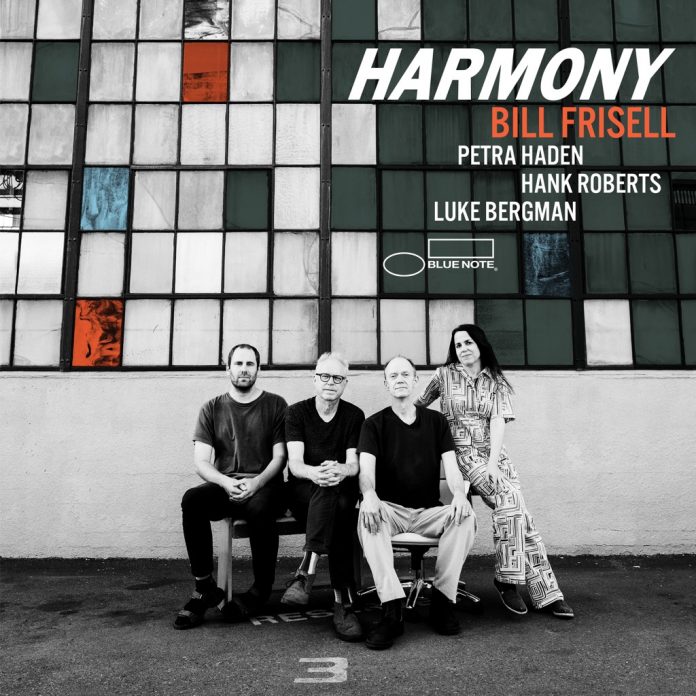 Bill Frisell continues to innovate and surprise. My last review of Frisell, with Thomas Morgan on the album Epistrophy, merited four stars and this one is heading in the same direction. To my surprise, this is Frisell’s Blue Note debut, though his association with Blue Note stretches back nearly 30 years with contributions to albums by John Scofield, Don Byron, Ron Carter, Norah Jones and Charles Lloyd & The Marvels.

Harmony features Frisell playing with a very distinctive quartet comprising two long-time collaborators – vocalist Petra Haden, cello player and vocalist Hank Roberts plus Luke Bergman on acoustic guitar, baritone guitar, bass and vocals. The album is the result of a commission from the FreshGrass Musical Festival, an organisation dedicated to “the vitality of contemporary American roots music”. The album features new compositions, imaginatively reworked compositions from Frisell’s back catalogue and a selection of jazz and Americana staples. Frisell’s ongoing calling to honour American music with integrity is to his credit.

The combination of music and musicians on this album gives Frisell a freedom of expression and musical dimension that is difficult to describe in words. Which is why I will use Frisell’s own: “If I think back throughout my whole life, all the music that I have loved, why can’t it be there at the same time? You can play a Bob Dylan song and you can play a standard song or a Charlie Parker song, and they can fit together. Why not?” Why not indeed? This album is testimony to the fact that you can.

With the absence of drums, this quartet moves seamlessly between the sound of a chamber ensemble, a small jazz group and an American harmony group. The music is finely textured, sensitive and intricate – almost ethereal and organic in a strange sort of way. Harmony is very different to anything I have heard before and that is a serious compliment for an artist who has been on the music scene for a very long time. The unique paradox that is Bill Frisell is that whilst he uses traditional folk music, American standards and jazz classics as his starting point, what emerges is a freshness of approach and creativity never experienced before. Long may he carry on making music as good as this.