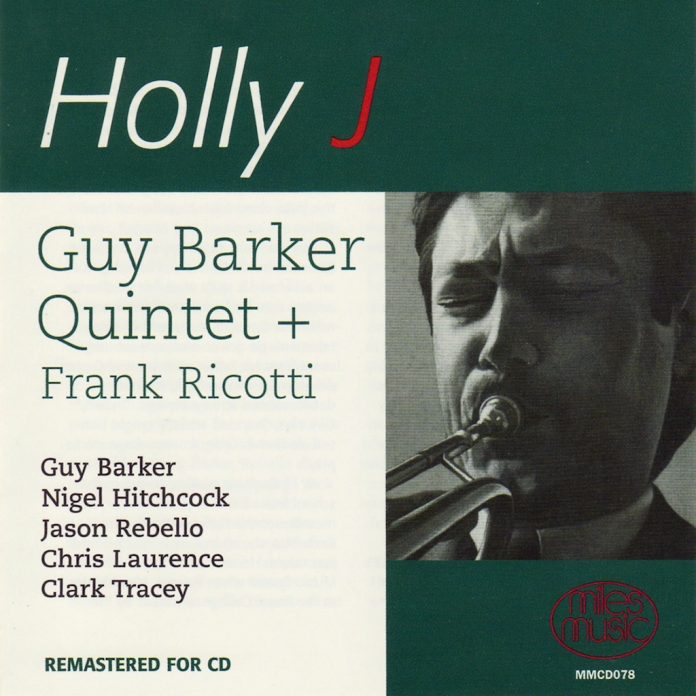 Now 31, Guy Barker has been a professional musician since he was 20. Yet he could hardly be described as well known in his native land. As far as I am aware he has soloed on few albums, and belatedly this is his opener under his own name. I first noted him through his work with Stan Tracey and by the time I heard his quartet on one of Keith Stewart’s broadcasts, had become aware that he was a prodigious trumpeter – a jazz soloist worthy of in­ternational acclaim, and one of our greatest section players. In his excellent sleeve note to this album Mike Hennessey notes the influence and encouragement which Guy was given by Clark Terry. I’m sure this is correct, but one is reminded more of Joe Wil­der in terms of Guy’s pure tone and of Joe Gordon and Lee Mor­gan in his lyrical improvising.

The presence of Nigel Hitch­cock here gives a double impetus to the album, for I am sure that in this young chap we have another Tubby Hayes on our hands

The presence of Nigel Hitch­cock here gives a double impetus to the album, for I am sure that in this young chap we have another Tubby Hayes on our hands. His dazzling solos have the urgency and invention of Tubby’s and like Tubby’s, their quality doesn’t vary. Both Nigel and Guy came through the ranks in NYJO, well proven as the best British source of potentially great jazz musi­cians in this country.

In the much-hyped playing of some of the more vaunted young British players one senses an un­ease and possible condescension when they play music of the kind featured here. The qualities which shine through Barker’s quintet include conviction and sincerity, and a natural inspira­tion that makes this album vastly more interesting than the last half dozen by Blakey’s Messengers, for instance.

If you remain unconvinced go to the almost eight minute trum­pet feature on It Never Entered My Mind, a classic invention to place alongside the famous ver­sions by Stan Getz, Miles Davis and Frank Sinatra. This is a text book for tone, range and vibrato as well as imagination.

It seems silly to get to the rest of the players as though as an afterthought, but perhaps it doesn’t matter, because at this stage of the game Rebello and Tracey are acknowledged mas­ters at their instruments and the old men Ricotti and Laurence have been scoring musical points for almost a quarter of a century – virtuosi both.

The writing by Barker and Hitchcock is strongly in character, with Barker’s Mr. Talbot featuring a masterful tenor and good vibes from Ricotti. As well there is a fat-toned and fleet solo from the leader which would appeal to anyone who likes the best of Joe Newman. Frank plays beautifully on the title track, a lovely waltz dedicated to his daughter, and I can’t think of anything to fault the album.

Oh yes I can, John Miles runs one of the only labels that doesn’t give the times of the individual tracks on the sleeve.

If you don’t object to that, then I can think of nothing to stop you placing this album at the top of your list of records to buy.
Steve Voce

Ian Lomax - 10 June 2020
Tomas Janzon is a Swedish, classically trained guitarist. After studying at the Royal School of Music in Stockholm he embarked on his professional career - touring, performing and recording...