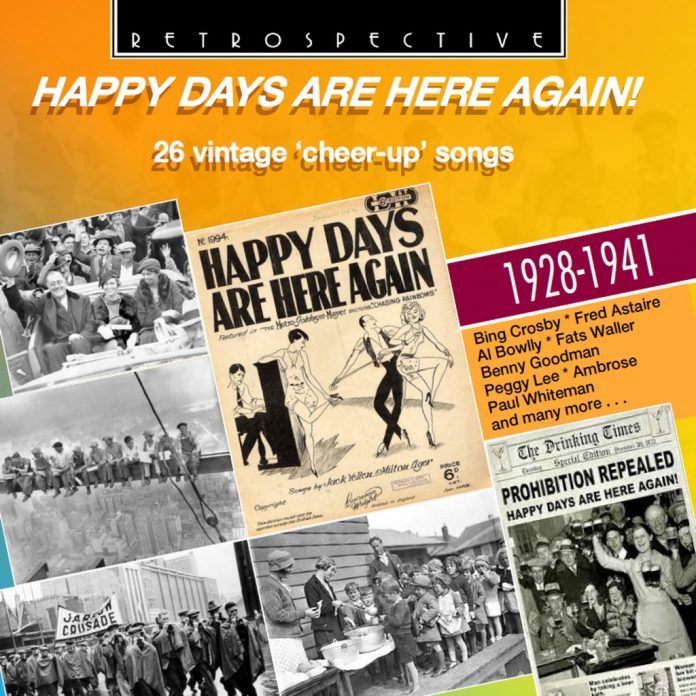 Covering the Great Depression years of the 30s, this wide-ranging selection consists of British and American “cheer up” recordings of songs garnered from the great shows and films of the day (1928-1941).

The opening title track says it all, really, in a well-arranged and crisply executed performance from the top-drawer Ambrose Orchestra (featuring trombonist Ted Heath). Most of the early tracks which follow hold little interest for the dedicated jazz listener – apart, perhaps, for a few upbeat, hot-dance-band style numbers, such as Sunny Side Up, Great Day, Get Happy, Smile, Darn Ya, Smile and a very lively and jazzier There’s A New Day Coming from Harry Roy, with more free solo work.

The Roy track ushers in a higher percentage of recordings by top jazz and swing artists in the later sessions of the CD. Fats is at his most heartwarming and devil-may-care. Other high spots include Billie’s When You’re Smiling (with outstanding solo input from Buck and Lester), and Peggy Lee with the Goodman sextet.

Quite a mixed bag, then, of vintage songs of varying calibre and style, but all recommending carefree optimism. Cheering people up still remains serious big business. You have to smile at Flanagan And Allen’s UK no.4 hit in 1940, in the bleakest, darkest days of WW2. They recorded Are You Having Any Fun? Those were the days! …If scarcely happy.

Full discographical details are included in the booklet notes. This is a cheerful and very enjoyable nostalgia-themed album from Ray Crick and the commendable Retrospective label.

Jazz Journal - 30 January 2022
The first solid news of Miles' return to the scene was brought by singer Betty Carter earlier this year. But she bemoaned the fact that Davis had elected to...