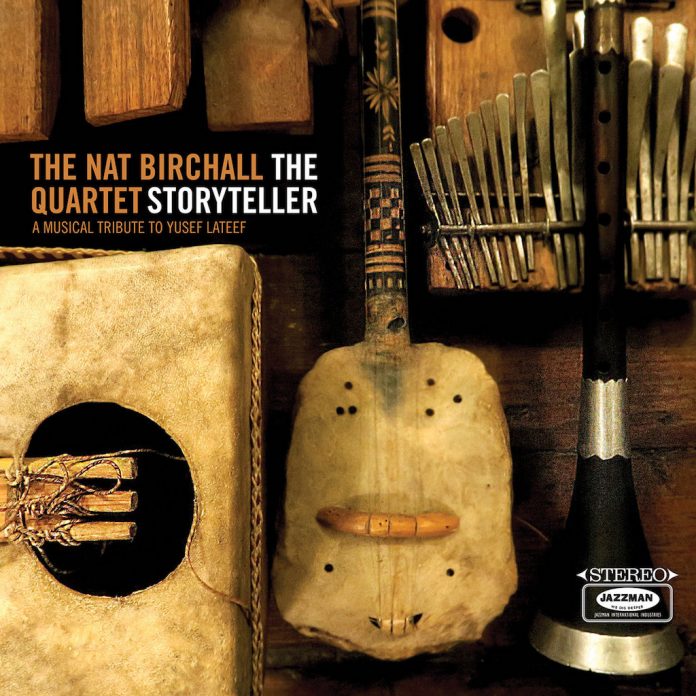 Birchall is so closely associated with the legacy of John Coltrane, it’s momentarily hard to discuss him in the context of any other horn player. And yet, the idea of him doing a tribute album to Yusef Lateef makes immediate and complete sense. Lateef was not just a master instrumentalist. He straddled different styles and musical cultures, played ballads with a sternly romantic tinge, mastered time signatures not usually encountered in straight jazz but still made them swing but also blew straight fours with abandon.

A challenge, then, for Birchall and his group, but also a chance to make use of some of the instruments gathered on his travels, and to work with material that invites other comparisons than Trane.

He must have been listening to Eastern Sounds, because both Ching Miau, an original, and Love Theme from ‘Spartacus’ appear on that brilliant 1961 album. Brother John, another Lateef composition, is best known from the classic Live At Peps.

Thinking about the legacy, what’s striking is how boldly Lateef wove together silly little show and vaudeville tunes with Saharan epics and almost harmolodic ideas. Birchall doesn’t quite follow him that far, but then by this point in his own career, he has his own sound and direction and doesn’t need the tribute to be too slavish, even when the originals are intended as dedications. I’d have liked to see something like See See Rider or When You’re Smiling (which Yusef covered on Into Something), just to vary the pace and tone a bit.

But no complaints about the playing. Adam Fairhall is, as ever, up for anything and plays with grace and intensity, as does fellow pianist John Ellis, who takes on six of the cuts and adds some nice percussion elsewhere.

The album was made in two sessions a year apart and if played in sequence does show some evolution of the concept, but that is not to say that The Storyteller is incoherent or bitty. I just sense that Birchall thought on and deeper about Lateef in the meantime. Another excellent statement from an important British musician, and a tip of the hat to one of the greats.