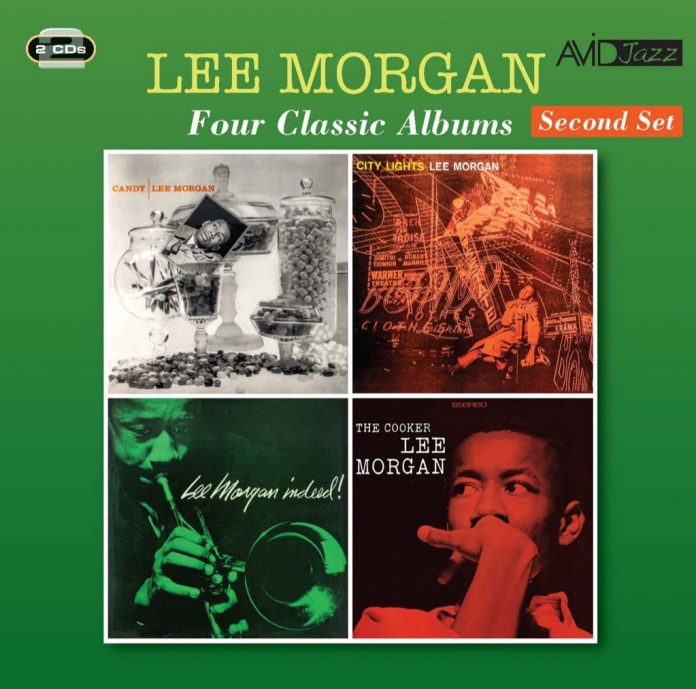 The first Lee Morgan set on Avid was a mixture, with material from VeeJay, Blue Note and Speciality. This second collection is all Blue Note from the very start of Morgan’s productive recording career. He is joined by other young players of the time who had a wealth of experience that no doubt rubbed off on the young trumpeter.

Morgan was 18 on the first of these sessions in 1957, playing with a well-established rhythm section (Horace Silver, and the relatively veteran Ware and Philly Joe) and his fellow Philadelphian, altoist Clarence Sharpe. His style at this point was influenced by Clifford Brown – clear, fluent and at times razor sharp. Attractive compositions by Silver (Roccus), Benny Golson (Reggie Of Chester) and – another trumpeter out of Philadelphia – Owen Marshall (Gaza Strip) all give the young man the opportunity to display his precocious technique and imagination.

The album Candy sees Morgan in a quartet (with Clark, Watkins and Taylor) showing great confidence in holding the front line without a second horn, and clearly he has absorbed other influences (of Gillespie and Miles Davis), noticeably on the ballads. For City Lights he is joined by the young George Coleman, on both tenor and alto, and trombonist Curtis Fuller, striking up a well-balanced and effective front line. Coleman’s alto is appropriately featured on the Gigi Gryce composition Kin Folks.

The fourth Blue Note included here is The Cooker, and the interaction between Morgan and the baritone of Pepper Adams (mistakenly noted as playing alto) is wonderful – their combined sound and individual contributions are a treat on A Night In Tunisia. The young Timmons steps up with an equally authoritative solo whilst Chambers and Philly Joe fit in perfectly. Understandably (they were hardly strangers), Chambers had played extensively with Morgan, and the bassist and drummer had joined him in recording with Ernie Henry a fortnight earlier; the same day the three had featured on Coltrane’s Blue Train.

Just One Of Those Things is taken at speed, Morgan’s clarity and accuracy first-rate; Lover Man is a chance for a pensive moment, before Morgan’s minor blues New-Ma gives everyone a blow – Timmons even quoting from the Lil Green/Peggy Lee number Why Don’t You Do Right.