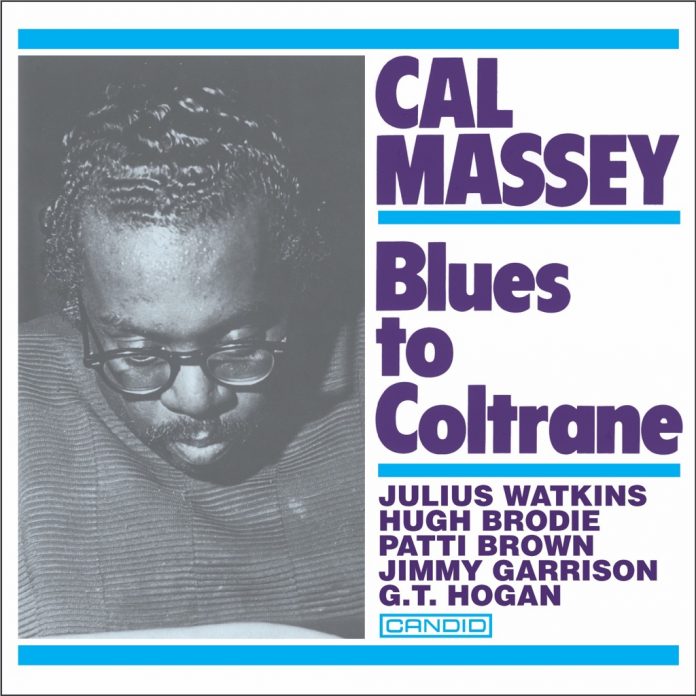 This is a rare and very welcome release. Cal Massey wrote strong jazz compositions which were recorded by Coltrane, Lee Morgan, Jackie McLean and McCoy Tyner but he had precious little opportunity to record himself.

This is, in fact, Massey’s only leader date, due to the fine selection by Nat Hentoff who recorded all the original classic Candid sessions for almost two years before the parent company pulled the plug and stopped all money for jazz recordings. Even then the LP was not released until the 1980s, no doubt lost in a pile of tapes awaiting release when the company folded. Only the track Father And Son appeared at the time on a Candid compilation LP called The Jazz Life.

The set begins with the very best on offer, the nine minute Blues To Coltrane. Jimmy Garrison, let off the lead by Coltrane for one day, begins with a steely walking-bass line before piano and drums join in. Massey’s trumpet is bright, edgy, and bluesy and he constructs a very convoluted and extended solo. Brodie then plays a broiling tenor solo very much in the Coltrane style with the hard tone and swirling lines prominent. Patti Brown has a strong Monk-like solo although she is saddled with a dreadful piano which you wouldn’t think would be acceptable in a well-known NYC recording studio. The combination of a piano on the edge and Patti’s jagged style makes it sound even more Monkish. Her piano lines though, along with Garrison’s virile bass and the tidy drumming of Hogan, make this a first-class rhythm section.

What’s Wrong is a ballad creation with uptempo sections threaded in, another example of Cal’s skill as a jazz composer. Bakai was written for Coltrane’s 1957 Prestige recording and here the composer puts his own fresh slant on it as indeed he does with Soulful Days, which featured on a Lee Morgan Blue Note date.

All of Massey’s solos are blues based, fascinating and very inventive which makes it our loss that he wasn’t recorded more frequently. At one point he quotes from Nobody Knows The Troubles I’ve Seen and few could claim more right to that lament than Massey. Julius Watkins adds pungent horn solos to the proceedings and the entire LP is highly recommended.