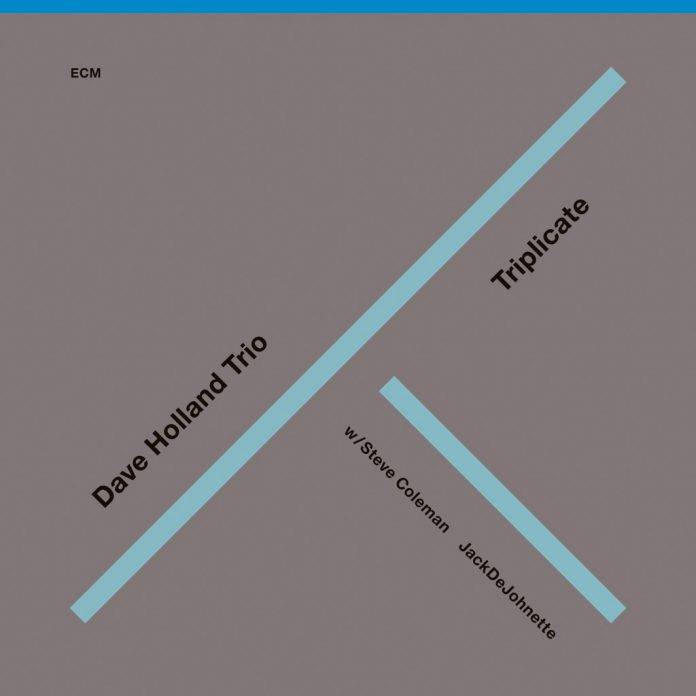 Triplicate – released on ECM in 1988 here reissued in ECM’s Touchstones series – was the first album by British bass veteran Dave Holland after the initial break of the quintet he had formed in 1983 with Steve Coleman on alto saxophone, Kenny Wheeler on trumpet, Julian Priester on trombone (interchangeable with Robin Eubanks) and Marvin Smith on drums. From this group, only Coleman remained for the trio recordings, with Smith now replaced by Jack DeJohnette on drums.

Viewed as the immediate successor to The Razor’s Edge – the quintet’s final release in 1987 (before reforming again in the 90s) – Triplicate is notably stripped back. The lack of harmonic accompaniment results in a thinner sound when compared to the quintet’s fuller horn section, but its absence allows the remaining musicians to really stand out, and for each solo to be delivered with outstanding clarity.

Improvisations between the trio are often jaunty or even playful in pieces like Games or Segment. The playing takes on a more subdued vibe in more solemn pieces such as Quiet Fire or Blue (a Jack DeJohnette composition), or in the repeated motifs of African Lullaby, a traditional song rearranged by Holland. Coleman sets himself the biggest challenge with Take The Coltrane, which inevitably invites a comparison to be made with the Ellington/Coltrane original. Coleman’s alto flourishes perhaps don’t quite reach the standard set by John Coltrane, but it is a fine cover nonetheless.

Holland himself has ample room for solos on the album, and his opening on Rivers Run is particularly effective in setting a melancholic mood which quickly dissipates into chaos as the piece goes on, due in part to DeJohnette’s delightfully unpredictable rhythmic patterns.

Triplicate was the first and only album recorded by Holland, Coleman and DeJohnette as a trio. However, the listener should not be dissuaded by this fact, as the group’s short lifespan does not reflect on the album’s quality or the compatibility of these excellent musicians.

Elliot Marlow-Stevens - 23 July 2020
This is trumpeter Shunzo Ohno's 18th studio album, a mixture of digital and acoustic instrumentation that demonstrates his prowess as a composer and arranger as...