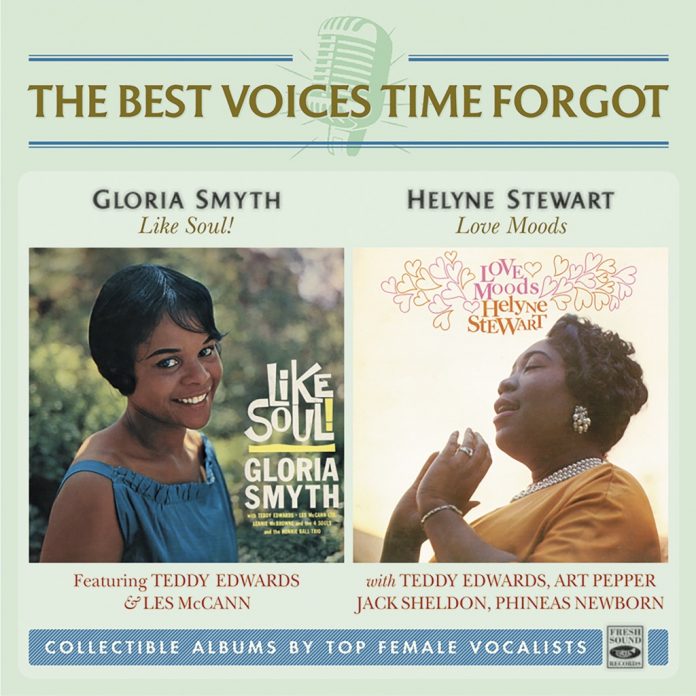 The Gloria Smyth album, from World Pacific, is mixed – some of the uptempo tracks don’t sound that convincing, and although she has a forceful and strong voice, some of the inflections seem a little forced. I feel she is at her best on the slower ones and the ballads, and it is on these that her voice sounds more assured and controlled. She sings attractively on Sittin’ And Sighin’, on which she benefits from the presence of Teddy Edwards’ sensitive tenor accompaniment, and on I’ll Remember April, where both singer and saxophonist use some imaginative phrasing.

Helyne Stewart is a more rounded and stylish vocalist, with good range and accurate pitch, and a voice at times reminiscent of Dinah Washington. Once more Teddy Edwards is involved, both as arranger and as a featured soloist, with a quartet and an all-star septet that includes fellow West Coast players Frank Butler, Art Pepper, Jack Sheldon and Frank Rosolino.

Issued originally on Contemporary Records, the material is a strong selection of standards and well-known numbers and Stewart handles them well, with straightforward interpretations and good accompanying solos – Why Don’t You Do Right is an example in point. A fine follow-on from the Lil Green and Peggy Lee versions, this has blues-tinged contributions from Edwards and pianist Phineas Newborn Jr. How Deep Is The Ocean is notable for her warm and rich delivery and for Pete Jolly’s unobtrusive but soulful background piano, the higher keys riding the wave of the lush horn arrangement.

Jazz Journal - 28 December 2021
The most immediately striking thing about Dick Morrissey's tenor playing is its tremendous swing. It is no exaggera­tion to say that the music on this record swings as much...