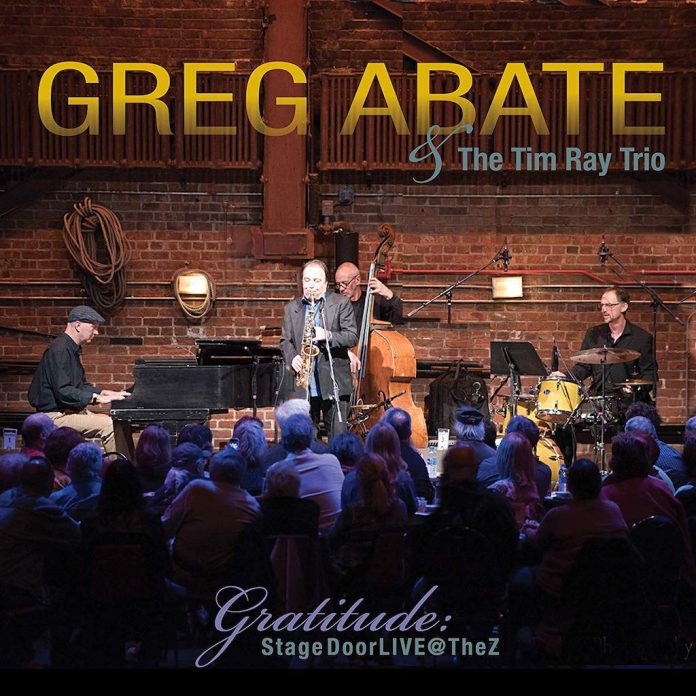 Every year Greg Abate tours the UK – he’s recently been over and if you missed him, don’t despair – he’s due back this autumn. Meanwhile, his latest release is a live recording that gives you a taste. All done in one take with no formal rehearsal, apart from a run through earlier, as Abate himself says in the sleeve notes – “the true essence of jazz, heard live and in the moment”.

After the title tune, a Latin-flavoured loosener, the musicians get down to a varied programme of originals and more familiar numbers. Bop Lives leaves no doubt about the saxophonist’s technique and his passion for bop; he skilfully builds his solo with glimpses of his blistering speed, which loses neither accuracy nor feeling. He drops in a quote from Work Song before a measured bass solo from John Lockwood and then the musicians trade eights with drummer Mark Walker.

Other uptempo numbers include In the Stratosphere (Abate on baritone), Dracula (which also serves as a showcase for an exciting contribution from Walker) and a version of Joe Henderson’s Inner Urge. But it’s not all fast and furious. Abate’s range of ability shows on ballads For The Love Of Life, which also has some lovely piano work from Tim Ray, and Farewell Phil Woods, a touching tribute to his late friend and mentor, including a long a capella coda.

Abate is known for his alto, deservedly so as it is with this horn that he excels, but as well as handling baritone proficiently, Inner Urge, For The Love Of Life and Roland Kirk’s Serenade To A Cuckoo all see him on tenor (of which I’d like to hear more) whilst his flute features on Hazy Moon and Gemini. The trio are left for their extended interpretation of Fats Waller’s Jitterbug Waltz, showing their mettle and no doubt the reason why Abate rates them so highly.

This is a well-recorded and enjoyable album of straightahead modern jazz with good contributions from first-rate musicians. Abate returns to these shores for a whistlestop tour in November and after seeing him a number of times last year, I can thoroughly recommend the experience.

François van de Linde - 12 January 2020
Whenever anyone expresses the idea, and with good reason, that Woody Shaw was "the last great innovator on trumpet", it is usually followed by the afterthought that recognition of...

Mark Gilbert - 23 January 2022
What/who were your influences as a jazz improviser? I loved Oscar Peterson – still do. He was my idol as a teenager. Stan Getz also and Joe Pass. There are...