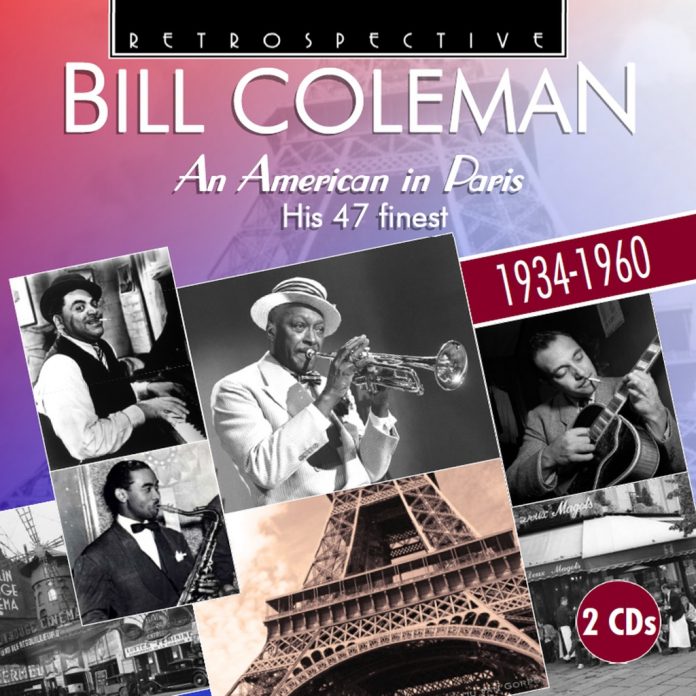 Like all his generation of trumpet players, Bill Coleman (born 1904) grew up in the beneficent shadow of Louis Armstrong. You can’t miss it in his playing, although it’s by no means a slavish copy. The nearest comparison I can think of, off hand, is with Buck Clayton, seven years his junior. Coleman’s tone is a little sweeter and his phrasing less clipped, but in fluency and elegance of style I’d say they were more or less equal. The reason Coleman is the less celebrated of the two is that he lived abroad for most of his career. This two-CD package covers 26 years when he was at or near his peak. It also presents a lively portrait of the jazz scene in Paris, both before and after World War Two.

It was the four numbers here with Fats Waller and his Rhythm, released world-wide in 1935, that first called the attention of jazz fanciers to Bill Coleman. He certainly sounds on top of the job, and his range is something to note. He never gave the impression of struggling for those high notes.

November of that same year found him in Paris, ensconced among its sizeable community of US jazz musicians. In fact, you can’t help noticing that there’s little sign of entente cordiale in many of these pre-war Paris recordings. They’re often all-American affairs, except for bass players (always in short supply) and, of course, the unignorable Django Reinhardt.

In their modest way, the first four tracks here are among the best of the lot. Accompanied only by Herman Chittison on piano and an almost inaudible bassist, Coleman really shines – melodic, simple, but unerringly on the ball. Chittison, another long-term Parisian, often worked as a solo pianist (notice how the bassist drops out during his solos). Nevertheless, he was an admirably swinging, if busy, accompanist, and appears on several of these pre-war sessions. Listen out, too, for another almost-forgotten figure of the 1930s Paris scene, the excellent Argentinian guitarist Oscar Alemán, on Joe Louis Stomp.

The most outstanding, and certainly best-known, of these sessions is the 1937 set led by Dicky Wells. I can understand why these three tracks, featuring Coleman, were chosen, but it would have been good to hear him alongside fellow trumpeters Bill Dillard and Shad Collins on that undisputed masterpiece, Between The Devil And The Deep Blue Sea.

With war impending, Coleman was back in New York by 1940. He found the swing era still going full blast and was soon as busy as ever – and in distinguished company, too, as the the last track of CD 1 and the first two of CD2 reveal. Linger Awhile is one of four numbers recorded at this inspired 1943 session, with Dicky Wells and Lester Young.

If the rest of the second disc isn’t quite as gripping as the first, that’s no reflection on Bill Coleman. Blame the split in the European jazz audience, with bebop on one side and Dixieland on the other. Being the complete professional, he made a remarkably effective shot at both. Just You, Just Me, with Don Byas, is rather impressive, if frantic. Most of the other boppish pieces suffer from clumsy rhythm sections. There’s a nice, mid-tempo Don’t Blame Me, with the excellent Jacques Dieval on piano and Coleman just being himself.

The Dixieland pieces, where he’s guesting with Dutch and Swiss bands, are perfectly good professional jobs, but not inspired – and he sings, which wasn’t his strong point. When it comes to the final track, from 1960, everyone has calmed down and the real Bill Coleman is back, in muted perfection.

Derek Ansell - 23 September 2019
Operating mainly in the Oxfordshire and Berkshire region, Fleur Stevenson is a relaxed jazz vocalist with a bright voice, good phrasing and the ability to swing at any tempo....