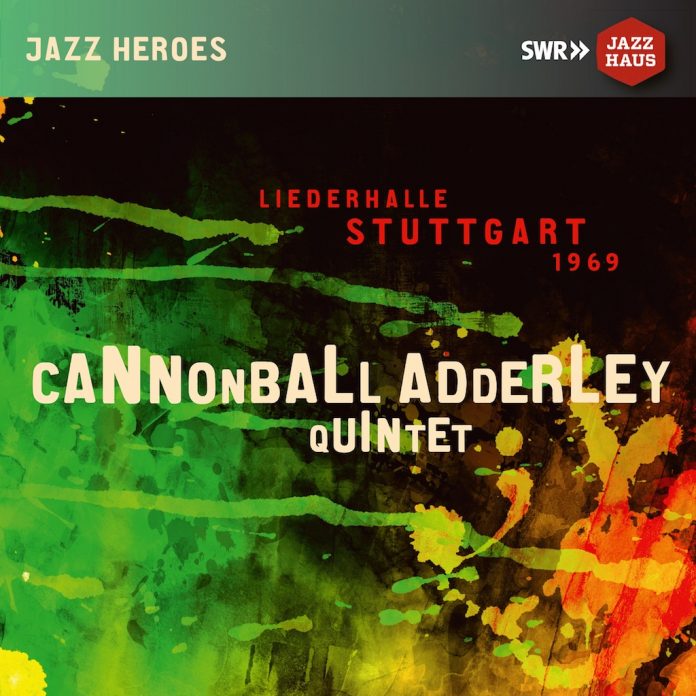 For some reason or other … OK, it was snobbery … Cannonball was frequently dismissed as facile by many critics during the period when his quintet was knocking out highly popular recordings of catchy soul-jazz. I doubt if that worried him much … the public liked him and, whatever the critics thought, he had earned the respect of such know-nothings as Miles Davis, John Coltrane and Phil Woods, whilst over the years he commanded a galaxy of talented sidemen, including Victor Feldman, Yusef Lateef, Joe Zawinul, Charles Lloyd and the brilliant bass ’n’ drums team of Sam Jones and Louis Hayes, later poached by Oscar Peterson.

Cannonball was always exciting to listen to, not least because of a big bluesy sound and a neat way with repetitive figures which, whilst one of the things that got up some snoots, showed his firm grasp of form and creative tension. When matched with top-class players like Davis and Coltrane he always rose to the challenge, and on albums such as Milestones, Kind Of Blue, Something Else and the oft-retitled 1959 Chicago session with Coltrane, he excelled.

Younger brother Nat, who was as impressive a young lion as Cannonball when they first came to notice, would occasionally relax into blandness on some of the recordings under his own name, but he made plenty of stirring ones too. He was an excellent and stimulating partner to Cannonball, and wrote several enduring tunes, not least Work Song, which topped off this concert.

Assuming the tracks represent the original order of play, the gig got off to a dramatic start with a 12-minute workout on Zawinul’s Rumpelstiltskin. (The sleeve says it’s 9.29 but my CD deck begs to differ.) Cannonball sounds like he has absorbed elements of the “avant-garde” but moulded them to his own purposes, Nat contributes a blistering solo and the composer’s spot is wide-ranging, including a Cecil Taylor-ish passage.

Nat’s Sweet Emma inspires strutting, somewhat declamatory solos with a gospel tinge, especially strong in Zawinul’s input. On Bernstein’s Somewhere Cannon is tender and passionate by turns, Zawinul rhapsodic, and there’s nice arco counterpoint from Gaskin. “Pops” Staples’s classic Why Am I Treated So Bad? is prefaced by Cannon saying how much he identifies with the song … no doubt mainly a reference to racism but possibly also hinting at the critical negativity. It’s a feature for Zawinul, who switches to electric piano. The gospel tinge comes to the fore until a switch to funk for the last couple of minutes, Gaskin and McCurdy providing muscular support.

Zawinul’s Painted Desert starts slow, is spiky and sometimes sour, with Cannon achieving some extraordinary timbres before the piece settles into a mellower but still melancholy mood for Nat’s solo. The composer’s spot is mainly brittle yet full of tasty chords. Oh Babe is another of Nat’s tunes, with a bright, soulful melody and a slinky gait. Cannon, hardly audible behind Zawinul’s electric piano, talks about the band’s approach to the blues before Nat offers a couple of vocal choruses, sounding a little like Clark Terry’s spoof blues-shouter.

Blue And Boogie is taken at dangerous speed and features a long but well-constructed solo by McCurdy. Walk Tall is another soul-jazz strut, given a fairly perfunctory walk-through before Work Song winds the concert up. Though they must have played this innumerable times, Cannon and Nat produce lively, engaged solos. It’s a satisfying conclusion to a hugely enjoyable session.