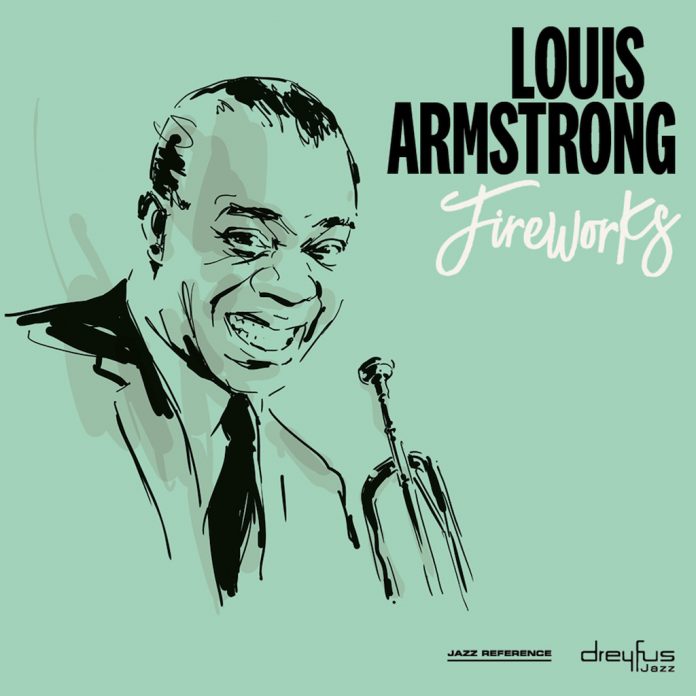 The Dreyfus label has released at least 28 tribute albums to major icons of jazz history, with classic recordings remastered, and ranging in time span from young Armstrong to Miles and Coltrane. These reissues are presumably conceived primarily as introductory samples to tempt new, possibly young, first-time buyers.

A few artists, deservedly including Louis, have been featured on two albums. Fireworks offers a window on young Louis in 1928, at the cusp of his incandescent early creative years. (Another Dreyfus album, C’est Ci Bon, presumably covers his later years as international star soloist, vocalist and entertainer.)

For the appropriately entitled Fireworks, Dreyfus has opted to confine its selection to the 21 tracks which Louis recorded in 1928, over various dates in June, July and December. This offers a window on just one but magnificent formative year in Armstrong’s long career. In doing so, the selection regrettably bypasses such earlier masterworks as Cornet Chop Suey and Potato Head Blues. However, compensation is at hand in abundance, as we marvel at Armstrong’s inspired jousting with the keyboard wizardry of Earl Hines, of comparable technique and talent. Louis responds wholeheartedly to the challenge.

He was now ready to move on, and to step on to the world’s stage. Listening again to these classic tracks, still awesome and thrilling, one can only wonder at his formidable power, technique and expressive tonal beauty, serving to deliver innovative flights of rhythmic and melodic creativity. The superb West End Blues says it all, whilst Fireworks and Weather Bird (Rag) show astonishing rapport, confidence and skill in the exchanges between Armstrong and the mercurial  Hines. Finally, Louis’s innate artistry can be savoured in his beautiful and impassioned solo in the minor blues Tight Like This.

With very good sound quality, this is a well-chosen introduction to the remarkable achievements of the young virtuoso who, as Dizzy Gillespie put it, created the language of the jazz trumpet.

Derek Ansell - 08 August 2021
This comprehensive overview of modern jazz in Britain between 1965 and 1972 is the beginning of an ongoing series of albums by the combos and orchestras represented here. First...

Jazz Journal - 30 May 2020
Egberto is a good guitarist, a fairly respectable pianist, is beautifully recorded in both roles, but produces not a note of jazz here. Though I dislike such vagueness of...