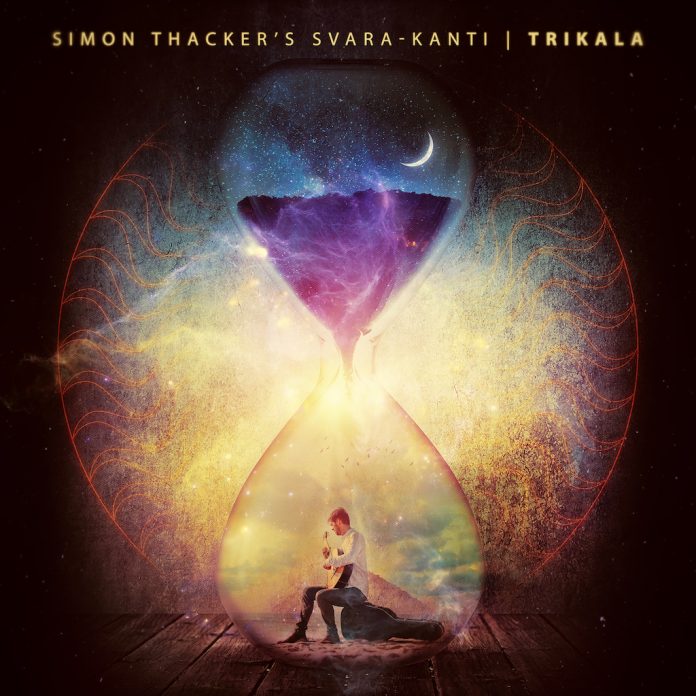 Like all of the most successful musical fusions, Simon Thacker’s Svara-Kanti make light of genre boundaries. A classical virtuoso specialising in nylon-stringed guitar, Thacker combines keen musicological rigour with an open-minded flair for adventure. Polish cellist Justyna Jablonska is a noted improviser in Eastern European folk traditions, while violinist Jacqueline Shave has led the Britten Sinfonia since 2005. Rounding out the core ensemble is celebrated percussionist Sukhvinder Singh (“Pinky”), who has toured with Ravi Shankar and performed on Ry Cooder and V.W. Bhatt’s 1994 Grammy winner A Meeting By The River.

As you might imagine, Svara-Kanti’s music can be approached from numerous different perspectives, but if like me you’re partial to John McLaughlin’s Shakti or Vanguard Records’ groundbreaking world jazz from the 70s, Trikala will take you to some welcome and familiar places.

The disc’s Sanskrit title denotes the three tenses of time (past, present and future), and seems perfectly apt in the context of Thacker’s pan-stylistic adventures. Panchajanya is as auspicious a start as you could wish to hear, forged through breathtaking virtuosity and the thrill of the chase. Recorded on location in Chenai with Venkatesh, Gopalakrishnan and Guruprasad, it is one of several pieces inspired by South Indian Carnatic traditions.

Disc one largely features the core quartet and a rotating cast of guest vocalists, though the Chenai quartet does return for the somewhat darker but equally terrific MaNN Vāsanai. Nirjanavanais is an improvised solo piece which finds the resourceful Thacker skilfully negotiating an ever-changing delay loop, but the epic Beyond Marawhichis is perhaps the real standout piece. As it moves from serene tranquility through many complex harmonic and rhythmic changes, latent tensions are dramatically released in its decidedly gritty improvised passages.

Recorded in Kolkata, the second disc explores the mystical Bengali folk traditions of some of the earliest troubadours, the Baul. With wild variations in attack and a strong sense of narrative development, it has a clear spiritual kinship with the great post-Coltrane quest for transcendence.

Taken together the contrasting faces of Trikala mark a step-change in Svara-Kanti’s evolution. Fully embracing improvisation and leaning on fewer compositions from outside of the ensemble, Thacker’s brilliant ensemble have found their metier.

Dave Jones - 14 July 2019
Another vinyl release from a recording made in the same year and at the same studio (Rudy Van Gelder’s) as Hancock’s Empyrean Isles, with the same drummer, Tony Williams,...