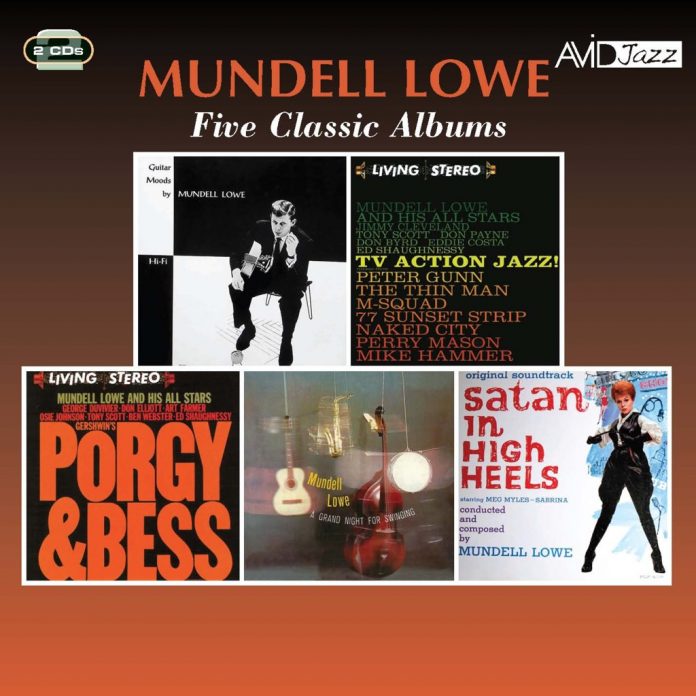 An outstanding musician, Mundell Lowe was intent on a career in music from very early childhood. By the late 1950s and early 1960s, the time when these albums were recorded, he had already played and often recorded with just about every big name in jazz, among them Miles Davis, Benny Goodman, Billie Holiday, Charlie Parker, Sarah Vaughan, Ben Webster and Lester Young. These years saw him in demand as session musician, leader of small and big bands, arranger and composer. The five albums gathered here come from this period and display Lowe in all these guises.

His guitar playing is central to the Guitar Moods session, all 12 tracks being virtually guitar solos with occasional discreet support from bass and drums interspersed with a few very brief moments from a woodwind player. On all of these tracks Lowe’s instrumental skill is vividly yet subtly displayed, while his arranging skill pervades on the next three albums.

Most of the music on TV Action Jazz! is rarely heard in a jazz context. Exceptions are Henry Mancini’s Peter Gunn and Fall Out, which come from Peter Gunn, and the themes from M-Squad and The Thin Man, by Count Basie and Pete Rugolo respectively. There are solos here from most of the members of the group.

On Porgy & Bess there are again solos from almost all, notably Lowe, Elliott, Duvivier and Webster. The quintet on A Grand Night For Swinging is very good and it is especially commendable for the rare opportunity to hear Quill.

The final album features music Lowe composed for the soundtrack of the 1962 film, Satan In High Heels. Out of context, the music sparkles and offers tight section playing and effective solos by a studio orchestra liberally peppered with jazz names.

Altogether, this double album is a fine testimonial to a musician whose long and productive career lasted until just a few months before his death in 2017 at the age of 95.

Leon Nock - 11 November 2019
This is yet another artist who is new to me and one presumably facing the hurdles of attempting to establish a niche in what remains of the supper-club circuit...