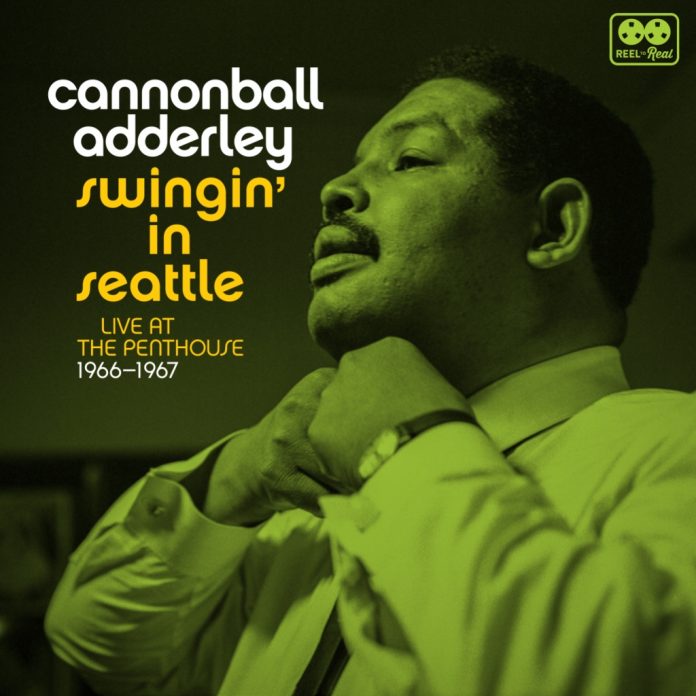 This is as much a memorial to Jim Wilke of Seattle’s KING-FM as it is to Cannonball. And we should include Penthouse owner Charlie Puzzo in that. The Adderleys played there eight times between 1962 and 1968, and the warmth between band and audience is palpable. With Victor Gaskin in on bass for Gilbert Rovère, this is the settled group that recorded at The Club in Chicago in July 1966, sets that were released on Capitol as Mercy, Mercy, Mercy.

The version of Hippodelphia that was included there was severely edited and one of the highlights of the October date here is that Joe Zawinul’s composition is given enough rein to deliver a truly memorable climax.

One of the striking things about the Adderley group was how varied its programmes were. Think how relatively few themes the Coltrane group – who appeared at the Penthouse in October 1965, the source of Live In Seattle – was perming at the same time. There’s a freshness and immediacy to the material.

The Sticks is Cannonball’s affectionately ironic tribute to Puzzo, a Connecticut boy, and to the Pacific North West, and it inspires one of his funkiest and most righteous solos of the opening, playing on the changes and just ahead of the beat, but throwing in some harmonic embellishment and some altissimo wails that wouldn’t have sounded out of place in the Coltrane group. They had, of course, been playing together in Miles’s group just seven years previously.

The lovely Morning Of The Carnival, from the movie Black Orpheus, gets a gentler and more lyrical treatment, with Cannonball often down in tenor range and tonguing end-of-phrase notes with great gentleness. I’ve rarely heard him sound quite so elegant, except, perhaps, on the magnificently rethought version of Bernstein’s Somewhere.

The other highlight of the set is Zawinul’s 74 Miles Away, a haunting, swaying thing that didn’t stay long in the band’s book, but received some detailed attention from the three main soloists when it did. Cannonball’s crowd-pleasing side comes out strongly on the Charlie Parker line Back Home Blues, which he takes as sole horn.

(Incidentally, don’t be put off by the number of announcements included. Cannonball’s raps were very much part of his thing, right to the end and no club date was complete without a little of his wry baritone wisdom.)

The Penthouse closed less than a year after the Adderleys’ last appearance there, and ended up as a parking lot. The ground must be haunted, and the spirits of Jim Wilke, Charlie Puzzo, Cannonball and Nat, Coltrane and a host of others must still gather there around opening time.

Peter Gamble - 22 June 2021
Schapiro 17 is an ensemble led by composer/arranger Jon Schapiro, conceived in 2012, whose previous release New Shoes: Kind Of Blue At 60, a fresh take on the Miles...