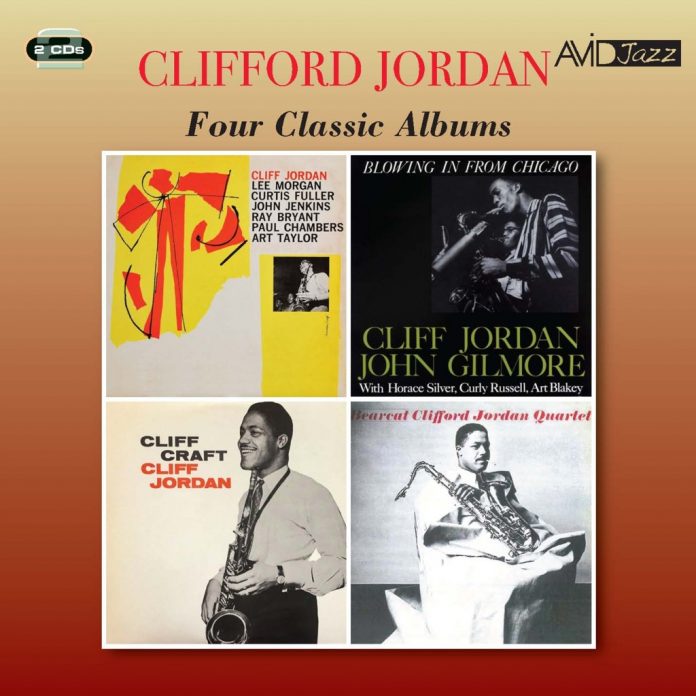 Coincidentally, someone asked me the other day what I really, honestly thought of Clifford Jordan. You always know where there this kind of question is coming from, and heading for. You’re expected to say, of an absent friend or colleague “You know what? I always found him a bit of a bore”, and that was the subtext to the question I was asked. But I stood my ground. The few times I saw Jordan in the flesh he was always more impressive than anything of his that I have on record, but these early things still get an occasional whirl.

The early set with Gilmore is pretty much a mates’ jam. Jordan went to school with the Arkestra man and Johnny Griffin, and partly because of that has always found himself lumped into a Chicago tenor box, even though that designation is only zipcode rather than musically significant. Blowin’ In generates more heat than light, as I’ve said before, as does the more languid Cliff Craft, though Art Farmer adds a welcome touch of subtlety to that one. It may be that the saxophonist didn’t quite fit the bill at Blue Note; too much swing in his language for Lion and Woolf, perhaps, even if he tackles a couple of Parker lines on both albums.

Bearcat is perhaps my favourite of the records, though I enjoy the 1965 These Are My Roots, which saw him tackling Leadbelly, and the Highest Mountain/Night of the Mark VII sessions from a decade later. By Bearcat, Jordan had matured as a composer and produces some distinctive lines, like the title tune and The Middle Of The Block that you might think would appeal to younger tenor players. And yet, he’s never had the tutelary cachet and authority even of a George Foreman or a Harold Land, which may be why my friend was assuming indifference and doubt.

I know the June 1957 least of all these dates. The original liner note has Horace Silver bewailing the fact that since the coming of the LP any cat who’s had a lesson or two is now in line to make a record. He’s saying it to make an exception of Cliff and Curtis Fuller, of course, but the point sticks. Jordan doesn’t have much of substance to say for himself and both Fuller and Lee Morgan, even the relatively unambitious Jenkins, beat him to the punch on most tracks. But there’s some nice, punchy jazz, enough to leave you with the impression of a good club date saved for posterity.

On reflection, I’d have to say – really, honestly – that Jordan never quite makes it into the top tier but left us some fine dates, some of the best of them packed together here, that sit astride modernism and older styles, perhaps too comfortably for critical tastes.