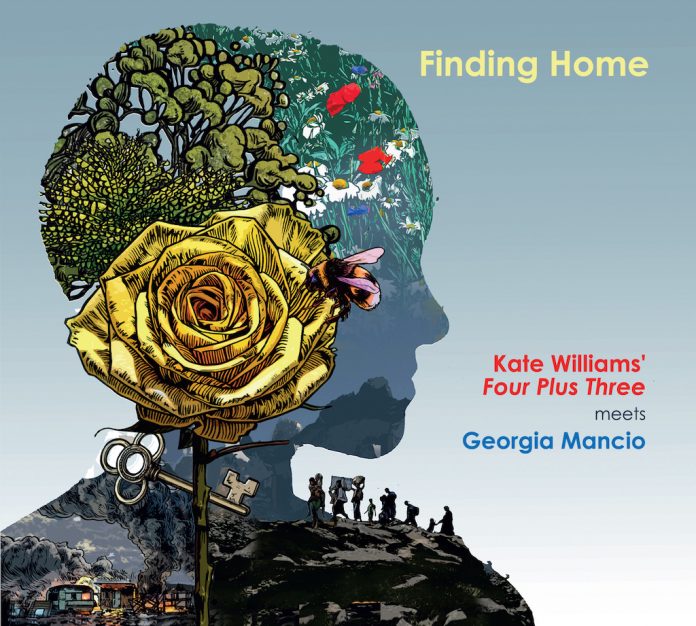 Kate Williams formed the group Four Plus Three with the idea of having a trio and a string quartet at the same time. She has been a friend of vocalist Georgia Mancio for more than 20 years and the two welcomed an opportunity to work and record together on this programme.

Three of the songs heard in this set were inspired by stories Georgia heard while she was in northern France as a volunteer with refugee groups. Poignant words, like the lyrics to The Last Boy On Earth, are sung with feeling by Georgia as she receives stark accompaniment from the strings and piano trio. Mournful cello and bleak piano interjections reinforce the moving lyrics. Even the drums sound bleak on this piece.

Halfway is more upbeat with the vocalist singing about freedom and the piano trio swinging behind her. Kate Williams takes a free-flowing solo here with solid support from bass and drums. We Walk has a sombre introduction from renowned classical guitarist John Williams, Kate’s father. Georgia Mancio sings her own pathos filled words on this, another anthem for the plight of refugees. Kate’s piano solo is bleak to start with but brightens up a little as she gets into it. The strings paint a grim picture though. A rather melancholic violin solo follows from Marie Schreer. Jobim’s No More Blues is sung with warmth and spirit by Georgia with strings and trio flowing behind her.

The atmospheric Finding Home is sung by Georgia in a speech-like style with jerky interjections from the band. The exception to the two-way music between Kate Williams and Georgia Mancio in this latter part is Tell The River which was composed by Alan Broadbent in an earlier collaboration with the singer. Kate’s free flowing solo sets a new mood for this selection at least, played as it is in trio format first. After a lengthy instrumental section Georgia comes in to sing her lyrics. Play, the last track, is in a slightly more cheerful mode; a set of memories of people now departed.

This is a strong mix of voice and trio, sometimes with strings added, comprising original material written by Kate and Georgia and reinforcing their tough musical compatibility.

Michael Tucker - 15 May 2019
This is the second excellent album of contemporary Serbian jazz I've had the pleasure of reviewing recently – the other being the duo V release by Uros Spasojevic (elb)...