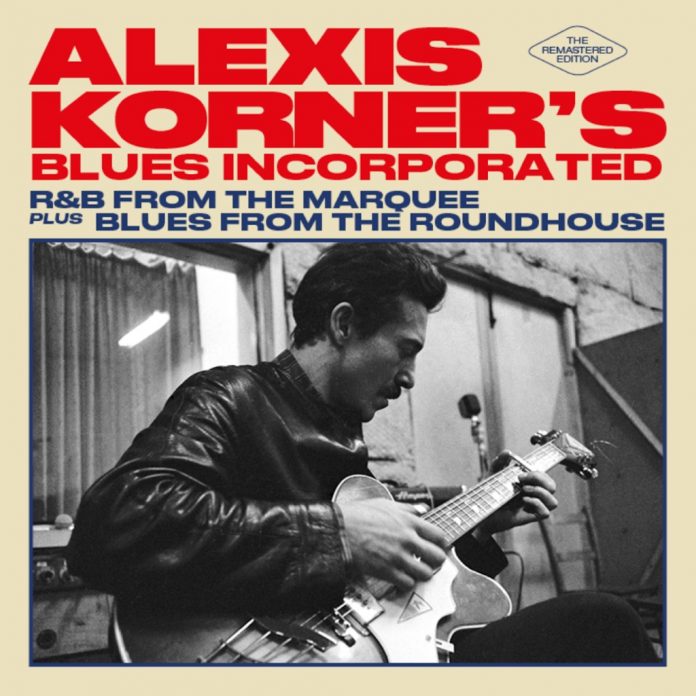 To gain some idea of why Alexis Korner’s Blues Incorporated caused the fuss that it did in 1962, start by playing tracks 13 to 20 of this CD, and then play 1 to 12. That way, you will first get the purist blues style that Korner and Cyril Davies evolved at their Blues and Barrelhouse sessions in the late 1950s. These took place upstairs at The Roundhouse, a Soho pub, and attracted a hard core of blues devotees.

The band on tracks 1 to 12 sounds bigger and louder, but, at this distance in time, not all that different. There’s the use of amplified instruments, of course, although that wasn’t much of a novelty in 1962. The real surprise was the presence of jazz musicians, and modern jazz musicians at that. The two notable examples here are tenor saxophonist Dick Heckstall-Smith and ex-Ronnie Scott and John Dankworth bassist Spike Heatley.

This all took place against the background of the late-50s trad boom, which was a kind of monstrous excrescence from the British version of New Orleans jazz, which was itself an outgrowth of revivalist, or traditional jazz. Over the previous decade and a half, jazz in Britain had been effectively divided into two mutually exclusive factions – traditional and modern, trad and mod. Any connection between the British blues and jazz worlds was automatically assumed to involve the traditional wing of jazz. This was where Korner’s career as a performer had begun, but his tastes were more adventurous than most. His real talent seems to have been not simply for leading a band, but for having bright ideas, putting them into action and making them work. The introduction of Dick Heckstall-Smith into a blues band was a typically bold stroke.

Disappointingly, there’s precious little to be heard of Heckstall-Smith anywhere on those 12 tracks. Indeed, the entire Marquee album might just as well have had Cyril Davies’s name attached, since he’s the star of the show. When he’s not singing, he’s playing the harmonica. Even Long John Baldry has a hard time getting heard. The original LP came out on Decca’s cut-price Ace of Clubs label, which may explain why the whole thing was recorded in one day, and produced by Jack Good (of Oh Boy! fame), which probably didn’t help.

But think of this as the slightly awkward but spirited beginning of the whole British blues-cum-jazz-cum-rock movement of the 1960s and beyond. Look up the list of those who passed through the band and follow the later progress of just a few of them. Take for instance Jack Bruce, Ginger Baker, Terry Cox, Dick Heckstall-Smith, Charlie Watts and Malcolm Cecil. With just that little lot you’ll soon come across the names of Cream, Pentangle, Colosseum, the Rolling Stones, and even Stevie Wonder.

Musicians meet other musicians, something noteworthy emerges, and afterwards they often say “It just happened”. But very probably it didn’t. It happened because somebody got a network going, somebody with a flair for making counter-intuitive connections. Somebody like Alexis Korner.

Michael Tucker - 22 September 2020
This extraordinary album from 1969 – which participant and sleeve-writer Ole Matthiessen rightly deems “ a spectacular Danish landmark recording session” – comes from the end of a decade...