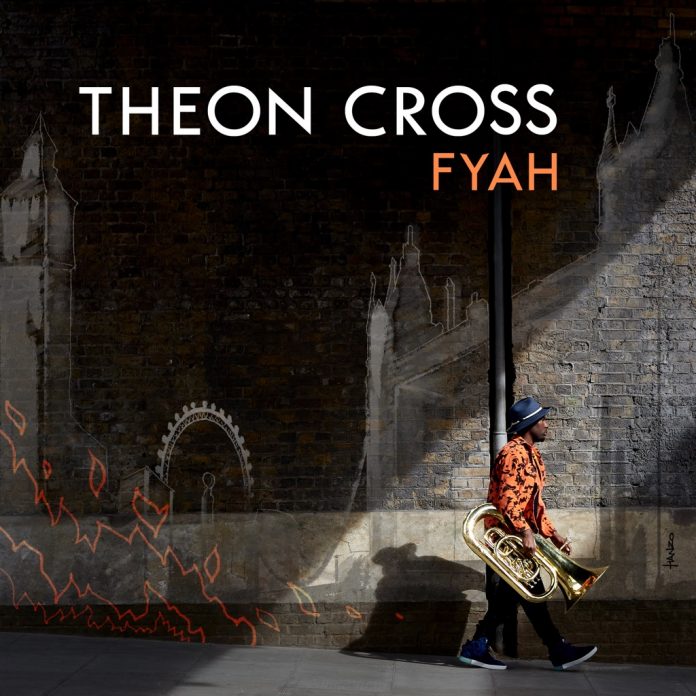 The glory in the jazz ensemble is often handed to the trumpet and the saxophone, and the tuba doesn’t get a lot of attention. But Theon Cross has – quite literally – blown new life into the instrument.

The tubaist made his mark on London’s jazz scene through his involvement with Sons of Kemet, whose energetic rhythms and politically charged protests on Your Queen Is A Reptile got them nominated for a Mercury Prize in 2018. Cross has also appeared on drummer and producer Makaya McCraven’s Where We Come From, and on Gilles Peterson’s London-focused compilation We Out Here.

Fyah is Cross’s debut album. It draws on the interconnected network of artists and the relationships among musicians that have brought the new London jazz scene to life. Among those joining him on this release are two other rising stars, Moses Boyd on drums and Nubya Garcia on tenor saxophone.

Despite the mastery Cross has over his instrument, the tuba is not one naturally suited to soloing. As a result, it is the saxophone that takes the lead for the most part, with Garcia or Wayne Francis soloing over Cross’s bass lines. Garcia has been one to watch on the tenor for some time now, whether in her own solo projects or with ensembles Maisha and Nerija. Here is no different, and Garcia is on fine form when delivering great solos on tracks like Activate, Panda Village and LDN’s Burning.

However, Cross is far from drowned out by the saxophone, and his infectious bass riffs bring the same energy to the music here as they do when he is with Sons of Kemet. When he gets the room to solo, it is this energy that makes up for whatever the tuba might lack in virtuosity.

Cross’s playing can also be appreciated in the less frenzied tracks on the album. In moments when the music is less intense, the tuba comes out with great clarity. Letting Go is a fine example of this, in which each note of Cross’s solo can be heard and picked out. And in CIYA, the thoughtful and melancholic horn arrangements written by Francis and trombonist Nathaniel Cross – Theon’s brother – are a beautiful highlight of the album. Another highlight is the funky Afrobeat Candace Of Meroe, featuring Tim Doyle on percussion and Artie Zaitz on electric guitar. These musicians feature sparingly throughout the album, but they are a welcome addition to this fun and danceable track.

Theon Cross has been on top form with Sons of Kemet, and Fyah is his chance to take some of the limelight. This solo project doesn’t quite live up to the accomplishments of Your Queen Is A Reptile, the latter crossing over into mainstream consciousness. But alongside an impressive group of musicians, Theon Cross has struck the right notes.

John Adcock - 21 January 2022
For the sake of a drummer, this would have been a very different recording, showing the randomness with which wonderful music comes about. Lundgren’s drummer had to cancel an...