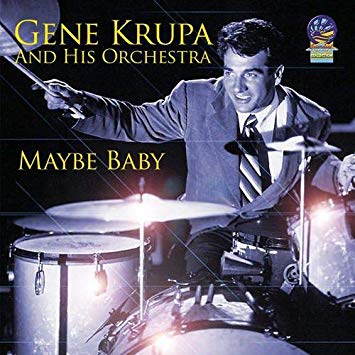 These rare recordings from January 1945 capture the Krupa Orchestra in two programmes from a series of live broadcasts for the Armed Forces Radio Service. Recorded on fragile, extended-play 16-inch discs at 78 r.p.m., the transcriptions have somehow survived, and sound quality has been attentively improved.

Much of the selected repertoire represents the popular commercial romantic ballads of the day, reassuring dance-band music doubtless out to satisfy the nostalgia for home felt by soldiers still serving in war-torn Europe. There are several smooth vocals from Buddy Stewart and some vocal group backing from the G Notes.

Krupa was still a very big name from the now fading swing era, and some tracks are performed in hotter swing style, with big band jazz riffs and showcase solos. The two trio tracks – “Number Ten Ritchie Drive” and “The Man I Love”- with Krupa, Charlie Ventura and Teddy Napoleon are disappointingly over-busy and poorly arranged.

Krupa doesn’t come across on these recordings as the charismatic, spectacular drumming star which he undoubtedly was, and only gets to stretch out a little in solo on the closing and liveliest track, “It’s Up To You”. Of interest chiefly to big band collectors.

Barry Witherden - 10 September 2020
Dunmall and Sanders have worked and recorded together many times over the years, but as far as I’m aware they have not played, or at least recorded, with Sanchez....

Jazz Journal - 27 June 2022
Nina Simone shares the cover of this reissue package with a multicolour ad­vertisement for LPs in the same series by Dusty Springfield, Val Doonican, Scott Walker, the Spinners, and...