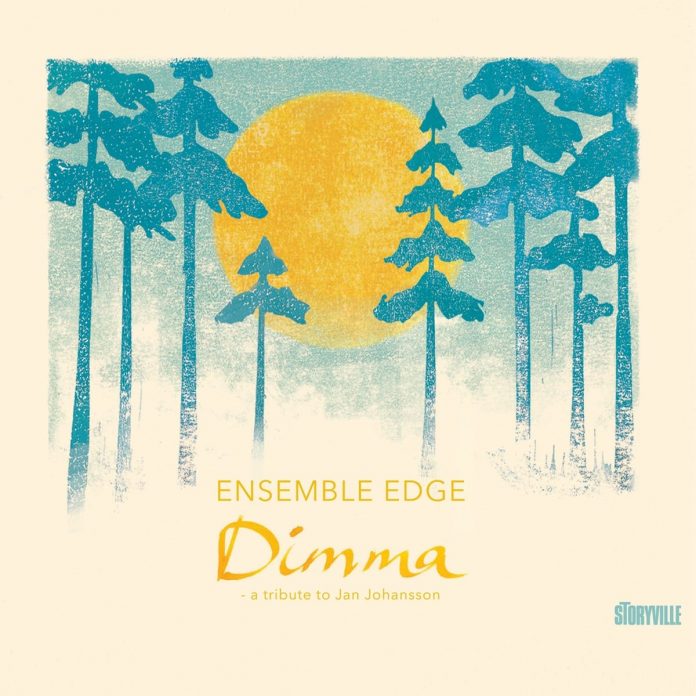 In his Jan Johansson: A Visionary Swedish Musician Erik Kjellberg made the astute point that, in an art founded often on a “play of nuances” – epitomised by the folk-rinsed Jazz På Svenska – pianist Jan Johansson (1931–1968) cut deep tracks in Swedish musical life. Beautifully packaged, with contextual information in English and all lyrics given in both that language and Swedish, the tribute to Johansson that is Dimma is testimony to how consequential such tracks continue to be.

The idea of presenting Johansson’s rhythmically and tonally intriguing music in a mixed jazz and choral setting, limned with instrumentation from the classical world, is hardly new. Kjellberg documents the considerable extent to which, following two ground-breaking Swedish concerts of autumn 1968 which featured jazz group and choir, Johansson’s music continued to inspire both choral and symphonic treatment. A recent example of a particularly successful chamber music approach is pianist Jan Lundgren’s 2015 The Ystad Concert: A Tribute To Jan Johansson featuring Lundgren with Mattias Svensson (b) and the Bonfiglioli Weber String Quartet.

Despite all such precedent, the 60-plus minutes of Dimma really are something else. The resonance of the diverse contributions from noted Estonian vocalist Karmen Röivassepp, the arresting blend of the mixed voices of the Ensemble Edge choir and the lovely touch and rhythmic sensitivity of pianist Calle Brickman all deserve special mention. But so too does the overall quality of playing and arrangements, assuring a nuanced breadth and blend of tonal delight in music delivered by voice(s), recorder and flugelhorn, piano and cello, bass and drums.

In his sleeve-note for the original LP release of Jazz På Svenska Johansson underlined the subtle suggestive power within the featured folk melodies, commenting: “There is no need to augment their rhythmic content by such additions as drums.” He had a point. However, nearly 60 years on, the variously pitched drum parts here, including the tempered fire and energy of the solo percussive figures in both Pä ängen Stod En Björk and the concluding, blues-based title track, bring something fresh and vibrant to the music, while never overcrowding matters.

Above all, one relishes the mix of variously poised and projected swing with moments of charged rubato reflection, the poetically turned solo and ensemble vocal keening and musing of many an arresting and sustained mood, exemplified by Emigrantvisa. Featuring a shape-shifting blend of material, voicings and dynamics, Dimma offers thus a simultaneously respectful and most imaginative, freshly cast perspective on long-loved material from Johansson albums such as Jazz På Svenska, Jazz På Ryska and Musik Genom Fyra Sekler.

There is also a new composition, Jakob Høgsbro’s Klara Stjårnor, built on haunting ensemble vocal figures as well as some deeply cast lines from classical cellist Martha Marie Petri. Together with her sibling, bassist Matthias Flemming Petri, the cellist supplied the initial inspiration for what would become a most striking, at times magnificent, achievement.

Anyone who has followed and appreciated Swedish jazz of a folk and (so-called) cool persuasion should love an album which I feel sure would have elicited warm approval from Johansson – whose aforementioned sleeve-note for Jazz På Svenska contained the following key reflection: “The ‘blue sonorities’ which serve as opposite of the closed and militaristic – they attracted me.” The late, Norwegian-born but Swedish-domiciled drummer Egil “Bop” Johansen commented once: “Nordic tonality [such as we find throughout Jazz På Svenska and Dimma] is in fact a sort of blues, Nordic blues, Scandinavian blues, if you will. For us jazz musicians, it’s but a short leap to experience that melancholy as a companion to joy.”

Relish all such magical conjunction in an album which deserves to be spoken of in the same breath as much of the best of Johansson, as well as Bengt-Arne Wallin’s related – and surpassing – Old Folklore In Swedish Modern of 1962. A triple “Bravo!” to each and every participant here.

Roger Farbey - 13 January 2020
The title derives not from the obvious allusion to late-night jazz sessions in (formerly) smoky bars and clubs, but to the fact that the majority of the tracks included...