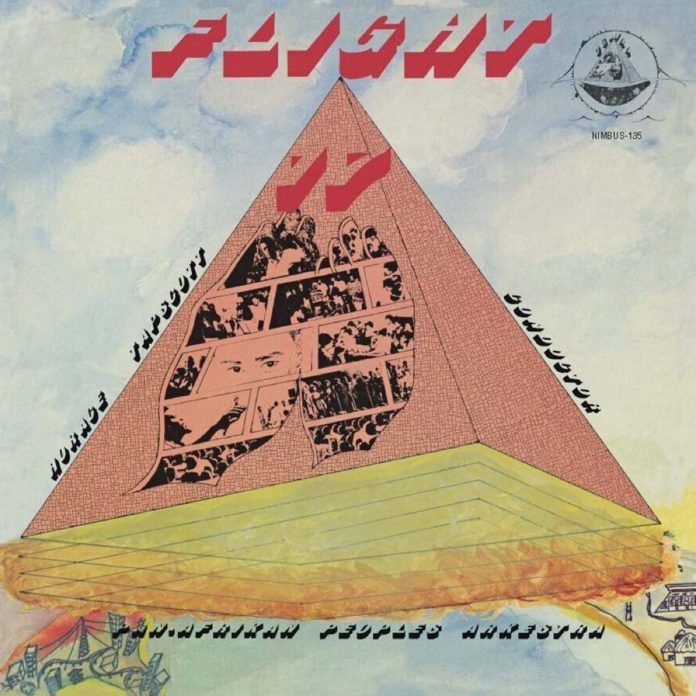 This session is a quite different proposition to Tapscott the piano trio leader he usually appears as. Here he is conducting and playing piano with his Pan Afrikan People’s Arkestra. If you’ve never heard of the PAPA it is not surprising; they operated from the mid-60s into the 1970s in performances, primarily at a regular gig at the Immanuel United Church of Christ and throughout LA but never recorded until 1978 when enthusiast Tom Albach determined that they should. To do so he founded Nimbus Records and set up this recording with Tapscott and the Arkestra. This was their first LP.

If the Tapscott Arkestra reminds people of another jazz “arkestra” that functioned in the 1950s and recorded for the enterprising but sadly short-lived Transition Record label, it was possibly quite intentional. The music is far out for the time, comprising piano solos interspersed with a sort of continuous riff from the reeds and brass.

The title track begins with an extended series of piano variations, out of tempo, that gradually brings in the horns, shouting and, seemingly, oblivious to what the piano is doing. Each horn player appears to be going for him or herself, blowing wildly towards the end in a dissonant manner. Breeze is slower in both tempo and intensity with Tapscott beginning to play in a more thoughtful and lyrical manner. The entire Arkestra are again featured as a wall of sound in the background. He is the only soloist here. Veteran Red Callender blows mournfully on tuba to reinforce and hold down the bass line.

The Arkestra could reasonably be described as one giant rhythm section, but I don’t think that was Tapscott’s intention. Because they waited 20 years before being recorded, they were quite likely forgotten before they got started.

There is more variety on offer on side 2 in three shorter tracks. Horacio is a Latin-based piece which is more conventional and quite different to the two pieces on side 1. Clarisse is a slow selection with touches of blues and bop but in a free style mainly. Maui has contrasting melody lines and even offers a saxophone solo but like the pretty flute piece at the end of Flight 17 there is no indication of which musician is featured.

With fascinating Tapscott piano lines, varied in mood and tempo, this record will no doubt appeal to enthusiasts in tune (if that’s the right word) with the free-style music being developed in the 60s and 70s.

Peter Gamble - 21 March 2019
With a combined age of over 220 years, there isn’t too much that Cyrille, Frisell and Smith do not understand when it comes to the art of improvised music...

Clairdee: A Love Letter To Lena