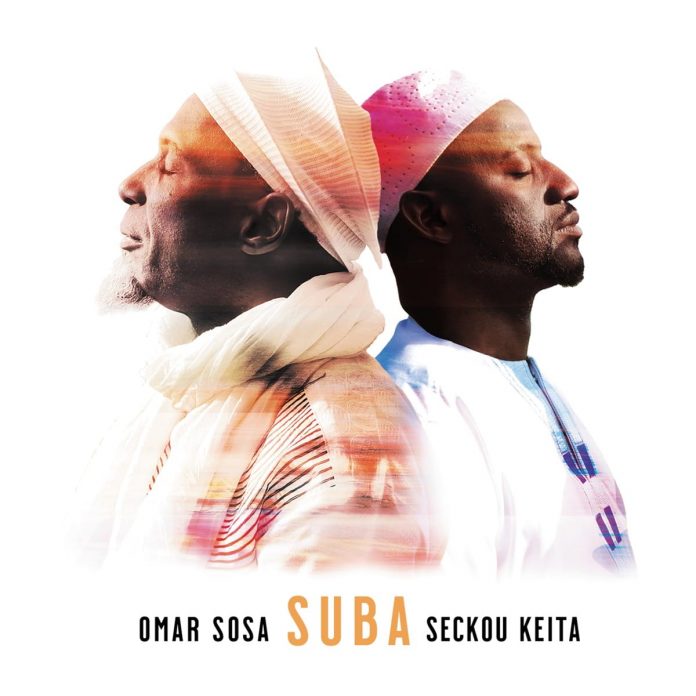 Four years after their well-received Transparent Water on Ota Records/World Village here is the second – and equally superb – album from the Cuban Sosa and the Senegalese Keita, released on the relatively new and excellent bendigedig label. Their first album led to a successful British tour with the Venezuelan percussionist maestro Gustavo Ovalles and I’m happy to see that a similar tour is set for this month (see dates below).

Suba means “sunrise” in Mandinka, the native language of Keita – whose warm and touching vocals play as entrancing a role here as his now spacious, now rippling kora figures. It’s not just the title of their first album, nor the fact that SUBA contains such pieces as Drops Of Sunrise, Voices On The Sea and Floating Boat, that makes me feel that the sunrise evoked by this music must be one spread far and wide, over deep and limpid water. If such a conjunction may conjure a poetics of reverie, it can of course speak also of the politics of the many appalling tragedies precipitated by the phenomenon of worldwide migration today.

Keenly aware of such politics, Sosa and Keita choose to focus instead on the redemptive or transformative potential of poetics, in music where, as Sosa puts it, the governing principle is “minimalismo” – or less is more. In the liner notes by Andy Morgan which illuminate the richly illustrated and generously packaged CD – a work of art in itself – Sosa comments further that he is at a point in life when “doing crazy solos has made me . . . I don’t want to say unhappy . . . but close to unhappy. Because for me, music has to be a conversation. Be humble. Breathe. Make space. I think the world needs gentle and beautiful, not arrogant, music. We don’t want fast, mad playing.”

One recalls the riposte which Lester Young directed at a fellow saxophonist who had tried to dazzle him with one would-be technically unmatchable line after another. “Yes, Daddy m – ,” said Young. “But can you sing me a song?” If there are no crazy solos on SUBA, there is much arresting playing: relish, for example, the delicious nudging figures of the dancing Gniri Balma or the interwoven grooves of the joyous, batá-driven 2020 Visions. Equally, there is a good deal of what some bebop die-hards might deem plenty of nothing – plenty of essential, nurturing silence, of the generative space exemplified by the magical opening measures of Rei’s Ray.

Throughout the album, the musicianship evinces a composite mastery, synthesising as it does – with judicious harmonic colour and exquisite dynamic alertness – both intricate and openly cast aspects of melody, rhythm and atmosphere from Cuba and Africa, Venezuela, Brazil and Europe. Hear the potent spare flute of Dramane Dembélé, from Burkino Faso, on Voices On The Sea and Rei’s Ray; the beauty of the Brazilian Jacques Morelenbaum’s diversely cast but equally compelling cello figures on KoraSon, Floating Boat and No One Knows, and the subtlety of the various soundscapes conjured at various points by Steve Argüelles and Yohann Henry.

As liquid and mellow as it is stellar in its organic mastery, SUBA is an unmissable release, suffused with the quality so dear to Lester Young: the soulful spirit of song, set in service of a world-ranging music of archetypal vision and deeply heartening consequence.

Nigel Jarrett - 16 March 2020
Few other jazz instruments set off as many cultural echoes as the organ. The Swedish Hammond B3 specialist and composer Andreas Hellkvist knows that, and his knowledge is manifest...