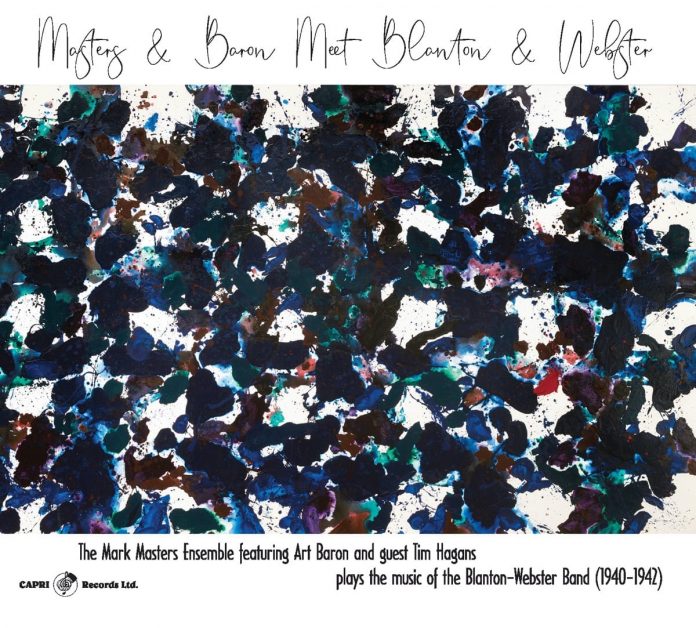 One of Duke Ellington’s most highly rated bands operated from 1940 to 1942, with bassist Jimmy Blanton and tenor saxophonist Ben Webster. Here, arranger/bandleader Mark Masters plays tribute, using his own arrangements. He is partnered by trombonist Art Baron, who played with Ellington in 1973, the final year of Duke’s life, and subsequently under Mercer Ellington.

The notes describe the music as “recomposing” the originals, but the difference is less than expected. One exception is a reconstructed Take The ‘A’ Train, although still clearly recognisable, rearranged imaginatively without losing any spirit of the original.

Bassist Bruce Lett fills the Blanton role, taking several solos and showing fine skill and technique. There are fewer solos from Kirsten Edkins and Jerry Pinter, despite billed as “splitting Ben Webster’s tenor duties”. Ellington originally encouraged Webster to improvise his own parts on the spot and as good as Edkins’ solo is on All Too Soon (taken at a slightly faster tempo than Ellington’s), it doesn’t have the smooth, relaxed delivery of Webster, and Pinter is unconvincing on In A Mellotone, struggling to reach high notes in an arrangement that generally lacks the momentum of Ellington’s. Of course it’s unfair to compare, but inevitable.

Having said that, a good fist is made of Jack The Bear, originally led by Blanton but here guided by Baron’s trombone, occasionally augmented by Lett; the accompanying orchestration is pared down. Also from Ellington’s March 1940 session is the darkly brooding Koko (“a little descriptive scene of the days that inspired jazz” – Ellington, 1943), lighter but effectively using Tim Hagans’ muted trumpet, followed by Baron and Lett. Hagans plays well elsewhere, muted and open, as does Baron, reminiscent of Tricky Sam Nanton.

A useful insert identifies the soloists and includes notes by Andy Hamilton, who makes reference to other interpretations of Ellington’s music, including that of Stan Tracey. No piano is included in this band, which I think is a mistake, but let the listener judge that.