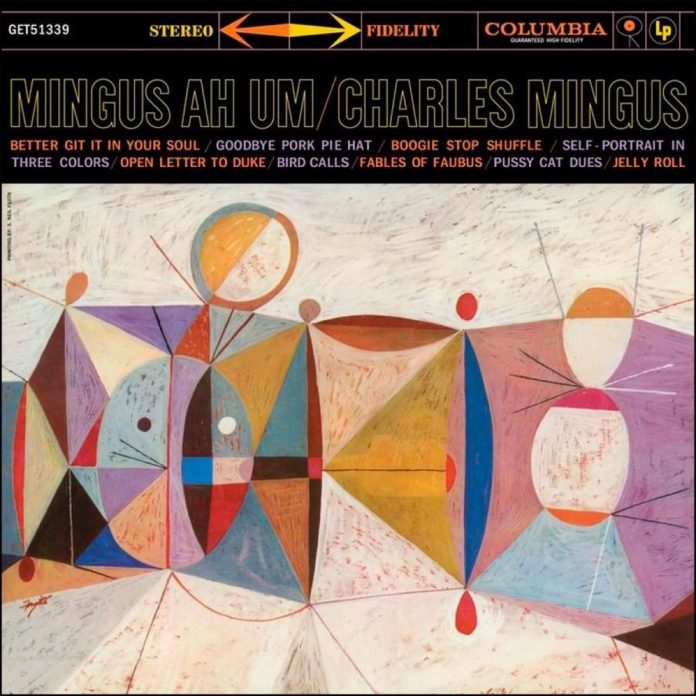 These days, I don’t listen to anything like as much Mingus as I should. The same goes for Duke Ellington and Charlie Parker, artists especially close to Mingus’s heart (witness, here, Open Letter To Duke and Bird Calls). Reason is, once you start to immerse yourself in the surpassing oeuvres of these three giants – consider, for example, the treasure chest that is the six-CD Mingus boxed set Passions Of A Man: The Complete Atlantic Recordings 1956-1961 – you begin to wonder: do I really need to listen to anyone or anything else?

One of the (many) Mingus albums I have listened to over the years, time and again, is Mingus Ah Um. What is there left to say about this long-fêted release from some six decades or so ago, featuring spot-on collective and individual work from an especially select array of musicians? Joining various other outstanding albums – including Davis’s Kind Of Blue, Coltrane’s Giant Steps and Coleman’s The Shape Of Jazz To Come – which mark 1959 as one of the greatest years for recorded jazz, this consistently compelling, intriguingly titled music remains one of the absolute touchstones of jazz.

As gospel-sprung as it is shot through with a blues-fired vitality; reflective and mellow, politically charged yet warmly humorous – as historically literate, overall, as it is vibrant in matters of swing and harmony, dynamics and voicings – Mingus Ah Um is presented here in both high-quality vinyl LP and CD format. The latter includes three tracks which were recorded at the original sessions but unreleased at the time: a punchy Pedal Point Blues, with Mingus on piano, the driving GG Train, and the waltz-fed but crisply energised Girl Of My Dreams from the 1920s – the only non-Mingus piece here.

These three tracks appeared on the CD version of Mingus Ah Um issued by Sony Columbia in 1998. This featured an illuminating sleeve-essay from Mingus specialist Brian Priestley – who observes of the 1920s-inflected Jelly Roll, for example, that here “Mingus is having fun with, but not making fun of early jazz”.

Mingus Ah Um had been issued on CD before in the CBS Jazz Masters series, where the noted graphic designer and painter S Neil Fugita (1921-2010) was duly credited for the original Miró-esque cover. Diane Dorr-Dorynek’s accompanying sleeve-essay was also reproduced. The Fujita credit appeared in minuscule and virtually unreadable manner on the side of the front cover of the 1998 Sony Columbia CD but there is no credit at all on this Groove Replica issue, in either the LP or CD packaging.

The LP has Dorr-Dorynek’s essay but this is dropped from the CD, which instead has an uncredited liner note distinguished chiefly by some extensive and interesting quotations by Mingus, taken from the Mingus Dynasty album he cut some six months after Mingus Ah Um. If you haven’t yet heard Ah Um I would recommend searching out the 1998 Sony release, such is the quality of Priestley’s essay – and the thoroughness of the issue’s discographical detail, which I have drawn upon below. But there’s no doubt that this Groove Replica offering remains an attractive package.

As Priestley says, “there are few albums in the history of jazz that open with two such strong and utterly distinctive tracks as Better Git It In Your Soul and Goodbye Pork Pie Hat”. Both these blues-based pieces were reprised by Mingus on the 1963 Impulse! Mingus Mingus Mingus Mingus Mingus while the threnody to Lester Young that is Goodbye Pork Pie Hat would also inspire several subsequent striking versions from Rahsaan Roland Kirk, Jeff Beck, Joni Mitchell and Stanley Clarke – the Beck cut precipitating an appreciative note of thanks from Mingus. However, it is the original 1959 recordings which retain lodestar status.

The lengthy, vocal-driven treatment of Faubus which Mingus recorded as Original Faubus Fables for Nat Hentoff’s independent Candid label in 1960 – with Eric Dolphy (as, bcl), Ted Curson (t) and Dannie Richmond – was a far more biting and comprehensive rejection of the absurdities and obscenities of racist segregation in 1950s America than the purely instrumental version found here. The story goes that Columbia would not allow the protesting lyrics to feature on Ah Um. Even so, the music sits well enough in the programme, with a fine pizzicato outing from Mingus and much suitably “vocalised” instrumental commentary.

I only once caught Mingus live, in August 1976 at Oslo’s legendary Club 7. He was heading up the great band with George Adams (ts, v), Jack Walrath (t), Don Pullen (p) and Dannie Richmond which two years earlier had cut the superb Changes 1 & 2 albums for Atlantic. It’s a memory which stays strong – as does the perennial impact of the glorious music that is Mingus Ah Um.

Bruce Lindsay - 01 November 2020
What’s The Hurry is an apt title for vocalist Kenny Washington’s album, for although he’s been singing professionally for many years (including a stint in the US Navy in...