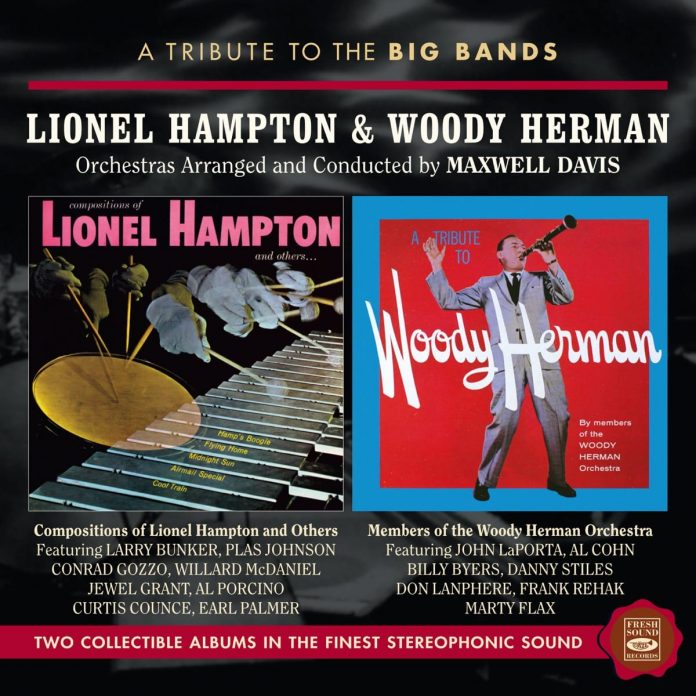 This 1958 “tribute to Lionel Hampton” includes among others, Al Porcino and Conrad Gozzo, Plas Johnson and Bumps Myers, with Larry Bunker on vibes, Irving Ashby on guitar, Gerry Wiggins on piano, Curtis Counce on bass, and drummers Earl Palmer and William Eperson.

It offers remakes of some familiar Hamptonian favourites. Air Mail Special and Midnight Sun receive respectful attention, while the longer tracks – a stomping (if primitive) Hamp’s Boogie Woogie (7.25), and a suitably raucous and ill-mannered Flying Home (7.00) – would satisfy the master himself.

A Tribute To Woody Herman is perhaps the most satisfying of these “tribute” albums. John LaPorta (as Woody) delivers his clarinet solos and asides with almost insolent skill. Eddie Costa on vibes, Jack Six on bass, Bill Potts on piano and drummer Jim Campbell underwrite and propel colleagues Al Cohn, Frank Rehak, Joe Romano and Don Lanphere in a well-chosen selection of classic Herman titles. Apart from Four Brothers and Bijou, the remaining compositions are by the multi-talented Woody.

All the arrangements, sensational in their initial recorded versions, have been respectfully treated by Maxwell Davis. Every track stays close to the original arrangements, but with innovative contributions from (unidentified) soloists. The “recreation” of Jimmy Giuffre’s Four Brothers, while no match for the original, is still memorable as performed by Al Cohn, Joe Romano, Don Lanphere and Marty Flax. Blue Flame (Woody’s lugubrious signature tune) has never sounded better. Woodchopper’s Ball, Northwest Passage and Apple Honey maintain that (high) standard. Highly recommended.

See the opening paragraphs of Maxwell Davis: A Tribute To The Big Bands – Duke Ellington & Count Basie for some general background on the Maxwell Davis tribute series.

Gordon Jack - 25 August 2020
This CD does not reveal any information about John Pal Inderberg at all so the following might be helpful. His sound is close to both Gil Mellé, who was...